Our garden has been quite prolific when it comes to our pepper crop. We have several varieties that include mild banana peppers, cayenne peppers, poblanos, two varieties of jalapenos, and habaneros. We also have two or three varieties of bell peppers that are not producing quite as well. There is one ghost pepper plant that has survived but so far no peppers.

I have canned  enough sweet & spicy pepper relish for the next year and about nine jars of my husband’s favorite “Cowboy Candy” aka pickled hot/sweet jalapeno pepper slices. I have roasted and peeled quite a few poblano peppers for the freezer and halved and deseeded multiple poblano, jalapeno, and banana peppers for the freezer also. We have given away quite a few and the peppers keep coming.

Earlier this year I bought a dehydrator from a friend for $5. My son asked if it would work to dry peppers to make our own cayenne seasoning and maybe even habanero. I told him to give it a try so he took the dehydrator and enough peppers to fill it home with him (he lives next door).

Today he brought the dried peppers back and pulverized them in my Blendtec. It worked wonderfully! We now have freshly ground dried cayenne and habanero pepper. I haven’t tasted it but my son says it tastes very good – different from what we buy, probably because it is so fresh and has no additives. He already has another batch going in the dehydrator. I wouldn’t be surprised if someone on his Christmas list receives some home grown dried hot pepper this year.

I originally reviewed “An Unlikely Blessing” on February 14, 2011. You can read my complete original review HERE.  I have included an excerpt of that review below.

“An Unlikely Blessing” has the same down home, character driven plot that kept folks reading Jan Karon’s Mitford series and Philip Gulley’s Harmony novels. I have read several books from both of those series and for my own personal preferences, “An Unlikely Blessing” takes first place. It is a heartwarming story with such real characters that I wanted to move right into Hilltop myself. Lots of humor, a bit of action, and just good storytelling makes “An Unlikely Blessing a keeper”. Read the book description below for everything you need to know without my throwing a spoiler into the works.

What can I say? I loved “An Unlikely Blessing” and can’t wait for the next installment so I can find out what is going on with Pastor Alex and his flock.

Well, it has been a bit over a year but I finally got to catch up with Pastor Alex and those dear folks of Hilltop. The same blend of good storytelling, humor, and wisdom was again evident in this second installment of Baer’s Hilltop series. Alex has begun to settle well into small town/rural life and realizes that he has never been happier. It has become evident both to him and the community that he is right where God wants him to be. New characters, a little romance, more humor, a bit of mystery, drama, and action plus some sad moments work together well to make “Surprising Grace” another endearing novel. I sincerely hope that future installments are planned. There are still too many unfinished stories in Hilltop that I want to read about.

This book was provided for review by LitFuse Publicity.

The charming and often hilarious Forever Hilltop series follows the experiences of former city dweller Alex Armstrong as he settles into his new role as pastor of a Scandinavian community in rural North Dakota. Alex is sometimes baffled by his parishioners and their colorful ways, but he comes to appreciate their simple wisdom. One thing’s for sure — life in Hilltop Township is never dull! This new two-in-one format features An Unlikely Blessing along with its sequel, Surprising Grace.

Meet Alex Armstrong, former city dweller who has just accepted his first parish assignment to a small community in the wilds of North Dakota. In Hilltop Township, Alex becomes familiar with the colorful residents and their odd traditions, from rommegrot to lutefisk. And then there’s the excitement the single pastor creates among the unmarried women in the community! Alex soon discovers that his new church home has as much to teach him as he has to teach them, providing all with An Unlikely Blessing.

Alex Armstrong is settling into his new role as pastor of Hilltop Church, and he’s even starting to understand the strange ways of the people who populate this barren stretch of North Dakota prairie. But he also finds that his flock needs help and counsel like he never imagined. In this cozy and entertaining read, Alex must choose between the woman he once planned to marry—and the home he’s come to love.

Romantic Times says of Forever Hilltop, “These two stories in one volume feature amazing characters – some are witting and some are quirky, but all of them are loveable and memorable. The small town comes to life and will remain with readers for a long time. Baer knows what her fans look for in a feel-good book and does not disappoint in either story.”

Read what other bloggers are saying about Forever Hilltop HERE.

Judy Baer was born and grew up on a farm on the prairies of North Dakota, experiencing many of the same things as her Hilltop characters. An only child, she spent most of her days with imaginary people-either those she read about or those she made up in her head.Baer graduated from Concordia College with majors in English and education and a minor in religion. While at the time, she was simply studying what interested her, Baer later realized that she was educating herself for her future career as a Christian writer. She certainly put her education to use as she is the author of more than 75 books.

A certified professional life coach now certified in three coaching disciplines, Baer coaches primarily professional and aspiring writers. She is also a faculty adviser in the Department of Human Development at St. Mary’s University in Minneapolis, MN. Baer has two daughters and three step children. She and her husband live in Minnesota.She invites you to visit her at her web site www.judykbaer.com for more information on her and her books.

Celebrate with Judy by entering to win a Kindle for you and a friend!

One grand prize winner will receive:

Hurry, the giveaway ends on 5/22/12. The winner will be announced 5/24/12 on Judy’s blog! Just click one of the icons below to enter. Tell your friends about Judy’s giveaway on FACEBOOK or TWITTER and increase your chances of winning.

Still House Pond is an intriguing story about life in rural Kentucky during the late nineteenth century. The narrative depicts the lives of the Gray family,  their friends and neighbors, particularly Lilly, her mother Copper, and their hired girl Manda.

The author captures Lilly in all her innocence, grit, and determination. Copper’s life as a wife, mother, and midwife/nurse to the community is described with an eye to detail that illuminates both the performance of her role and the emotions  she experienced. And Manda. Well her love for women’s magazines, fashion, and love stories leads her on a quest for an exciting romance that brings about unexpected results and not a little disillusionment. The expressions and exploits of Lilly and her younger brother and sisters were true-to-life and made me laugh more than once.

Still House Pond is full of life, humor, love, some suspense, and plenty of unexpected twists and turns.  To say much more would probably take away from the reader’s enjoyment so I will just say “If you love charming, life-like historical novels, you really need to pick up a copy of Still House Pond.

This book was provided for review by Tyndale House Publishers. 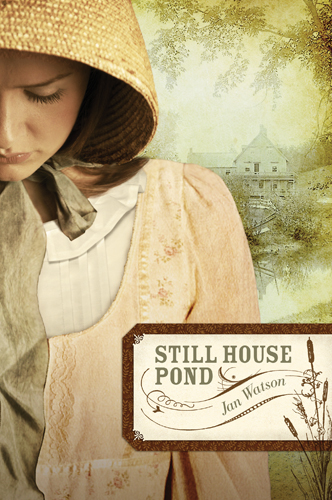 Lilly Gray Corbett loves living on Troublesome Creek, but she would much rather play with her best friend than watch her little brother and the twins. When Aunt Alice sends a note inviting her to a visit in the city, Lilly is excited to go.

Lilly’s mother, Copper, isn’t quite ready to let her young daughter travel all the way to Lexington by herself, but she reluctantly agrees to let Lilly go. When news that Lilly’s train has crashed reaches her parents, they rush to find out if their daughter is injured—or even alive.

Learn more about Jan Watson and her books on her website.

Jan Watson won the 2004 Christian Writers Guild Operation First Novel contest for her first novel, Troublesome Creek. Her other awards include a nomination for the Kentucky Literary Award in 2006 and second place in the 2006 Inspirational Readers Choice Contest sponsored by the Faith, Hope, and Love Chapter of the Romance Writers of America. Willow Springs and Torrent Falls are the sequels to Troublesome Creek. Jan was a registered nurse for 25 years at Central Baptist Hospital in Lexington, Kentucky. She incorporated her nursing experience in the hospital’s mother/baby unit into her novels. Jan resides in Kentucky.

Fall color has been brilliant here in west Tennessee this year. I am told it is due to our hot dry summer, warm days and cool nights for most of the fall, and a very late frost. Whatever the reason, the leaves have been more beautiful than I can ever remember. I thought I’d share a few of my photos with you. All of the photos were taken in fields that surround my home. I wish there had been opportunity to venture further for more photos but that wasn’t possible this year.

The last 2 photos are ones I had fun playing with in my favorite graphics software. I like the watercolor effect I was able to achieve.

Today I will take a side trip from the subject of books to give you a tiny view of our life in the country. Out cat population has exploded. It all started with one mama cat who likes to hide her kittens. When they finally make their appearance, they are so afraid of these huge humans they have never seen before that they are pretty much feral. If you can’t catch them, you can’t give them away or have them neutered! So their numbers have continued to grow. Recently my husband decided to take matters in hand and started letting them eat from a coffee can while he touched them. After several weeks, we actually have several formerly wild cats that have become affectionate and want our attention. The original mama cat is still wary. She knows who feeds her but that is all she wants from us.