This week, the
Christian Fiction Blog Alliance
is introducing
Shattered Silence
Abingdon Press (September 2012)
by
Margaret Daley
ABOUT THE AUTHOR:

Margaret Daley is an award winning, multi-published author in the romance genre. One of her romantic suspense books, Hearts on the Line, won the American Christian Fiction Writers’ Book of the Year Contest. Recently she has won the Golden Quill Contest, FHL’s Inspirational Readers’ Choice Contest, Winter Rose Contest, Holt Medallion and the Barclay Gold Contest. She wrote for various secular publishers before the Lord led her to the Christian romance market. She currently writes inspirational romance and romantic suspense books for the Steeple Hill Love Inspired lines, romantic suspense for Abingdon Press and historical romance for Summerside Press. She has sold eighty-three books to date.

Margaret is currently the President for American Christian Fiction Writers (ACFW), an organization of over 2300 members. She was one of the founding members of the first ACFW local chapter, WIN in Oklahoma. She has taught numerous classes for online groups, ACFW and RWA chapters. She enjoys mentoring other authors.

Until she retired a few years ago, she was a teacher of students with special needs for twenty-seven years and volunteered with Special Olympics as a coach. She currently is on the Outreach committee at her church, working on several projects in her community as well as serving on her church’s vestry.

On a more personal note, she has been married for over forty years to Mike and has one son and four granddaughters. She treasures her time with her family and friends.

Learn more about Margaret and her books on her Website.

If you would like to read the first chapter of Shattered Silence, go HERE.

Shattered Silence is a perfectly executed suspense-filled novel featuring  Texas Ranger Cody  and Liliana the female police offer he works with to investigate a string of murders that offer very few clues to the identity of the killer. With each death it becomes more difficult to ascertain whether they are related to the previous murders and time could be running out as Liliana begins to receive some dangerous threats herself.

What more could I ask? Shattered Silence is a romantic suspense set in Texas with a Texas Ranger hero and a savvy heroine. The plot was filled with enough twists and surprises to keep me turning the pages. Although I suspected the identity of the murderer before the end, there were other levels to the mystery that prevented me from being 100% certain I was right. This was not a perfectly straightforward and simple plot but had ingenious developments that definitely kept the story interesting. The subtle romance and the subplot involving Cody’s son just added to my enjoyment. Loved this book and recommend it to all lovers of romantic suspense and/or Texas Rangers.

Free From Guilt by Pat Simmons

This week, the
Christian Fiction Blog Alliance
is introducing
Free From Guilt
Lift Every Voice; New Edition edition (September 20, 2012)
by
Pat Simmons
ABOUT THE AUTHOR:

Pat Simmons is a self-proclaimed genealogy sleuth. She is passionate about digging up the dirt on her ancestors, then casting them in starring roles in her novels. She has been a genealogy enthusiast since her great-grandmother died at the young age of ninety-seven years old.

She has won numerous awards for her previous novels and was voted the Best Inspirational Romance for 2010. She was also a nominee for the African American Literary Award’s best Christian fiction award. Pat is best known for her Guilty series. The Jamieson Family Legacy trilogy: Guilty by Association, Guilt Trip and Free From Guilt is a continuation of first three Guilty Series books and the of the story of the much-loved Grandma B.B character and her new sidekick, Mrs. Valentine.

Pat and her husband live in Missouri and have two children.

Learn more about Pat and her books on her Website.

The Jamieson Family Legacy series follows the lives of the two Jamieson brothers in Boston, Kidd and Ace and their cousin Cameron from St. Louis. Kidd, the older brother, is struggling with anger and resentment issues toward his absentee father who never married his mother, but had the audacity to demand his illegitimate sons carry his last name Jamieson. Ace, on the other hand, is on a collision course with disaster as he shows how much a “chip off the old block” he is when it comes to women. Their highly educated MIT graduate cousin, Cameron Jamieson, is all about saving his family from self-destruction. Through genealogy research, Cameron’s mission is to show his cousins their worth as eleventh generation descendants of a royal African tribe and give them a choice: to be angry black men or accept the challenge to become strong successful black men.

In Free From Guilt the third book in the Jamieson Legacy, Cameron, cousin to Kidd and Ace, has it all: the looks, money and brains. An MIT double degree graduate and lecturer, he is a genius. No amount of knowledge or wisdom however can convince him of the simplicity of God’s love and the gift of salvation. He believes it’s much more complicated than those men preaching from an outdated book lead others to believe. It’s simply going to take more to make a believer out of him. And, he’s not alone in this thinking.

Beatrice “Tilley” Beacon, aka Grandma BB is a seventy-something, childless widow who is young at heart and full of life. Her antics are legendary among her surrogate family, the Jamiesons, her five hundred facebook fans and the local law enforcement, to whom she is known as the neighborhood one-woman militia crime task force.
The Jamieson’s always thought they were a unified front to draw Grandma BB to Christ. But when Cameron, her surrogate grandson and the youngest of their clan, returns to spend time with the family in St. Louis, he immediately takes Grandma BB’s position that life is to be enjoyed to the fullest. There’s always time to repent …later.

If you would like to read the first chapter of Free From Guilt, go HERE.

“Christmas Roses” is an absolutely delightful historical romance that lives up to its Currier and Ives style cover and the nostalgic images it brings to mind. Young widow Celia fears that if she doesn’t get more boarders, she will lose her home and be unable to care for her baby daughter. Her prayers are answered when Mark shows up at her door looking for a temporary home while he continues to search for his father. Neither is looking for love but find themselves drawn to the kind and caring qualities of the other. Anyone who tends to read romance novels will know from the beginning where this story will end but the pages between hold a treasure trove filled with all the warm magical feelings of the season that will have you believing in Christmas miracles once again.

Another of Cabot’s exceptional books that is filled with love and faith, “Christmas Roses” is a must read on a cozy evening as Christmas approaches. I have proudly added it to my own Christmas book basket.

This book was provided for review by
Revell, a division of Baker Publishing Group.

Amanda Cabot invites readers to cozy up with a romantic, heartwarming tale of the greatest gift of all–love.
Celia Anderson doesn’t need anything for Christmas except a few more boarders, which are hard to come by in this small mining town. She certainly doesn’t have a husband on her Christmas wish list. But when a wandering carpenter finds lodging at her boarding house, she admits that she might remarry if she found the right man–the kind of man who would bring her roses for Christmas. It would take a miracle to get roses during a harsh Wyoming winter.

But Christmas, after all, is the time for miracles . . .

Available September 2012 at your favorite bookseller from Revell, a division of Baker Publishing Group.

Amanda Cabot is an accomplished author under various pen names and a popular speaker. The author of Paper Roses, Scattered Petals, Tomorrow’s Garden, and Summer of Promise, she is also a charter member of Romance Writers of America, the cofounder of its New Jersey chapter, a member of the ACFW, and an avid traveler. She lives in Wyoming.

“Amanda Cabot’s characters and storytelling create the extraordinary out of this Texas tale. I’m in love with her books.”–Laurie Alice Eakes, author, Lady in the Mist

Praise for Promise of Summer

“This is a lovely and romantic read that I highly recommend!”—thelibrariansbookshelf.blogspot.com

“In Cabot’s Westward Winds series starter, readers will enjoy reading through the story’s twists and turns. The characters are an interesting bunch; some of them are quirky, some are serious, but all have a story to share. With each book, Cabot writes something new and fresh.”—RT Book Reviews

This week, the
Christian Fiction Blog Alliance
is introducing
Judge
Bethany House Publishers (November 1, 2012)
by
R.J. Larson
ABOUT THE AUTHOR:

R. J. Larson is the author of numerous devotionals featured in publications such as Women’s Devotional Bible and Seasons of a Woman’s Heart. She lives in Colorado Springs, Colorado, with her husband and their two sons. Prophet marks her debut in the fantasy genre.

Learn more about R. J. and her books on her Website.

Kien Lantec, you will bear witness to my followers in ToronSea.

The last thing Kien Lantec expects on his first day of military leave is to receive marching orders from his Creator, the Infinite. Orders that don’t involve destroyer-racing or courting the love of his life, Ela. Adding to Kien’s frustration, his Infinite-ordained duties have little to do with his skills as a military judge-in-training. His mission? To warn the people of ToronSea against turning their backs on the Infinite to worship a new goddess.

But why Kien? Isn’t this the role of a true prophet, such as Ela of Parne? Seeking answers, Kien visits Ela and finds her stricken by a devastating vision of her own. Her birthplace, Parne, has forsaken their Creator and will soon suffer judgment. Pulled in separate ways, each must seek to follow the Infinite’s leading…and hope He will reunite them again soon.

Child of dust, will you be My servant?

If you would like to read the first chapter of , go HERE. 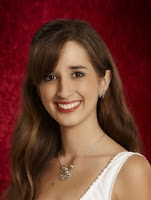 Anne Elisabeth Stengl makes her home in Raleigh, North Carolina, where she enjoys her profession as an art teacher, giving private lessons from her personal studio, and teaching group classes at the Apex Learning Center. She is married to the handsome man she met at fencing class and lives with him and a gaggle of cats. She studied illustration at Grace College and English literature at Campbell University. Heartless is her debut novel.

Anne Elisabeth is also the author of the Tales of Goldstone Wood, a series of fantasy adventure novels told in the classic Fairy Tale style.

The Black Dogs Are on the Hunt, But Who Is Their Prey?

When a cursed dragon-witch kidnaps fairest Lady Gleamdren, the Bard Eanrin sets boldly forth on a rescue mission…and a race against his rival for Gleamdren’s favor. Intent upon his quest, the last thing the immortal Faerie needs is to become mixed up with the troubles of an insignificant mortal.

But when he stumbles upon a maiden trapped in an enchanted sleep, he cannot leave her alone in the dangerous Wood Between. One waking kiss later, Eanrin suddenly finds his story entangled with that of young Starflower. A strange link exists between this mortal girl and the dragon-witch. Will Starflower prove the key to Lady Gleamdren’s rescue? Or will the dark power from which she flees destroy both her and her rescuer?

If you would like to read the first chapter of Starflower, go HERE.