The Hope of Shridula by Kay Strom

This week, the
Christian Fiction Blog Alliance
is introducing
The Hope of Shridula
Abingdon Press (March 2012)

A word from Kay:

Kay Marshall Strom… who am I? Well, I’m a traveler… a railer against social injustice… a passionate citizen of the world. I’m a follower of Jesus Christ. I’m a 21st century abolitionist who speaks out against slavery of all kinds. I am a beach walker and a gardener and the off-key singer of songs. I’m a wife… a mother… a sister… a daughter… a friend.

Most people, though, know me as a writer and a speaker. So here is a bit more about that part of my life:

Of my 39 published books, seven have been book club selections, twelve have been translated into foreign languages, and one has been optioned for a movie. My writing credits include numerous magazine articles, books for children, short stories, television scripts and two prize-winning screenplays. Along with my husband Dan, I also have produced a series of booklets for writers. My writing has appeared in a number of volumes including three versions of the NIV Devotional Bible and the devotional book My Heart—Christ’s Home, Through the Year.

I love to write, and I love to share about topics close to my heart. I speak at seminars, retreats, writer’s conferences, and special events throughout the country. And because I do enjoy travel, I even speak on cruise ships! 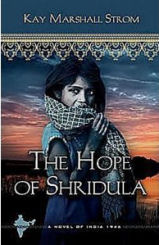 The Blessing in India series is a saga set in India’s heartbreaking history and breathtaking present that points toward a future of hope. Along the way, name-only Christianity collides with Hinduism, and then is confronted by an entirely new understanding of the call to follow Christ.

India: 1946. For forty-eight years, Ashish and his family toiled as slaves in the fields of the high-caste Lal family, and all because of one small debt. At fifty-four, Ashish was old and worn out. Every day was a struggle to survive for his family including his only daughter.

His wife had named the girl Shridula—Blessings. “Perhaps the name will bring you more fortune than it brought me,” Ashish told his daughter. His words proved to be prophetic in ways he could never have imagined. And when the flames of revolt brought independence to India, they seared change into the family of Ashish.

If you would like to read the first chapter of The Hope of Shridula, go HERE.

Learn more about Kay and her books on her Website.