This week, the
Christian Fiction Blog Alliance
is introducing
Submerged
• Bethany House Publishers; Original edition (May 1, 2012) •
by
Dani Pettrey
ABOUT THE AUTHOR:

Dani Pettrey is a wife, homeschooling mom, and author. She feels blessed to write inspirational romantic suspense because it incorporates so many things she loves–the thrill of adventure, nail biting suspense, the deepening of her characters’ faith, and plenty of romance. She and her husband reside in Maryland with their two teenage daughters.

Just in case you’re curious…The real Dani does love traveling. She’s been to some amazing places (Greece, Hawaii, the Keys) and there are many more she hopes to visit in the future.

And while she’s not quite up to sky-diving, cave diving or heli-skiing (too high, too enclosed, too cold!) she and her family love hiking, canoeing, wave jumping and a ton of other outdoor adventures a little further down on the risk scale. 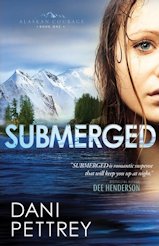 Yancey, Alaska was a quiet town . . . until the truth of what was hidden in the depths off the coast began to appear.

Bailey Craig vowed never to set foot in Yancey again. She has a past, and a reputation–and Yancey’s a small town. She’s returned to bury a loved one killed in the plane crash and is determined not to stay even an hour more than necessary. But then dark evidence emerges and Bailey’s own expertise becomes invaluable for the case.

Cole McKenna can handle the deep-sea dives and helping the police recover evidence. He can even handle the fact that a murderer has settled in his town and doesn’t appear to be moving on. But dealing with the reality of Bailey’s reappearance is a tougher challenge.

She broke his heart, but she is not the same girl who left Yancey. He let her down, but he’s not the same guy she left behind. Can they move beyond the hurts of their pasts and find a future together?

If you would like to read the first chapter of Submerged, go HERE.

Learn more about Dani and her books on her Website.

Looks like I have yet another debut author to add to my need-to-read list. Submerged by Dani Pettrey quickly grabbed my attention and didn’t let go until the end. The story began with a crisis and the momentum built from that point on. Great characters were realistically portrayed with their strengths, weaknesses, and enough back story to make them interesting. The well described Alaskan setting was the perfect background for the story. The slowly building romance between Bailey and Cole and a strong but subtle message of faith were woven believably into the suspenseful plot.

Although still haunted by shadows of her past, Bailey was a strong, loyal and caring person who just needed to understand the truth about her salvation and to forgive herself. Cole was the perfect hero even though he had a few issues of his own. The rest of the McKenna family as well as Cole’s friend Landon played prominent roles and their strong personalities stood out. I am hoping to see another book or two that will continue their stories.

Submerged was a thoroughly satisfying read and could stand on its own next to books by many well established authors. I predict a long and successful writing career for Dani Pettrey and look forward to her future books.