Love in Disguise by Carol Cox

This week, the
Christian Fiction Blog Alliance
is introducing
Love in Disguise
Bethany House Publishers (June 1, 2012)
by
Carol Cox
ABOUT THE AUTHOR: 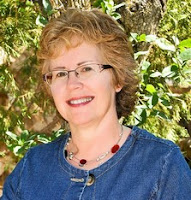 Native Arizonan Carol Cox has an abiding love for history, mystery, and romance. The author of more than 25 books, she believes in the power of story to convey spiritual truths. Carol lives with her husband and daughter in northern Arizona, where deer and antelope really do play–within view of the family’s front porch.

A word from Carol:

As a native of Arizona, I have a longtime interest in the Southwest and its history. My family shares my love of the Old West, as evidenced by this photo taken back in the halcyon days before my son turned to a life of crime and started robbing trains for a living…

Learn more about Carol and her books on her Website.

When costume-maker Ellie Moore suddenly finds herself out of a job in the middle of a bleak Chicago winter, she uses her knowledge of theatrical disguise to secure a position as an undercover operative with the Pinkerton Detective Agency. Her assignment: find the culprit behind the theft of silver shipped from the mines near Pickford, Arizona.

Disguised as Lavinia Stewart, a middle-aged widow, Ellie begins her investigation. Soon she finds she must also pose as the dazzling young Jessie Monroe, whose vivacious personality encourages people to talk.

If you would like to read the first chapter of Love in Disguise, go HERE.

Love in Disguise is a historical novel set in Arizona that is jam packed with action, adventure, drama, mystery and suspense plus a generous dose of humor and romance. After losing her job as an assistant to a stage actress, Ellie found herself left with very little money and a trunk full of stage props and costumes. Using her knowledge of using clothing and other items to change a person’s appearance, Ellie secured a trial job as a Pinkerton agent. When her  assigned partner backed out, it was left up to Ellie to track down the men responsible for stealing silver from the miners in Pickford. The real fun began with Ellie’s two different roles – as a middle-aged widow, and as her young, attractive niece, especially as she tried  to keep her roles straight and coming up with good explanations for why Lavinia and Jessie were never seen together. To further complicate matters, Ellie found herself quite attracted to Steven, one of the mine owners but couldn’t reveal her secrets to him.

Not only was Love in Disguise entertaining and enjoyable, but it raised some pertinent questions  such as “Is there any situation that really justifies deception?” – an issue that Ellie grappled with throughout the book. I enjoyed everything about this story and particularly liked that even though at first Ellie’s faith was just for show, it soon became a reality in her life.

I am struggling with trying to avoid spoilers so I will conclude by saying that if you enjoy historical western romance novels as well as some humor and suspense, then Love in Disguise is the book for you.