A Light in the Window by Julie Lessman

After reading the stories about their children in Julie Lessman’s  Winds of Change and Daughters of Boston series, I was delighted to have a chance to read Marcy and Patrick’s story in “A Light in the Window. It was all I have come to expect from one of Julie’s books and I am happy to recommend it. Like her previous novels, “A Light in the Window” is refreshingly honest and includes a large dose of romantic tension. Tempered by a bit of humor and dramatic action, the story focuses on relationships with family, friends, the opposite gender and God.

Marcy and Patrick’s relationship was filled with ups and downs, misunderstandings, friendship, and distrust. An excellent example of how a relationship with God can change a person and how another person can unknowingly be the influence that leads them to the Lord, “A Light in the Window” has several lessons in life and faith for the reader to ponder. Its Christmas theme is the perfect setting for this wonderful story.

If you have enjoyed Julie’s other novels, you don’t want to miss this one. It’s available now at Amazon.com as a preorder to be delivered to your Kindle on November 9.

A digital copy of this book was provided for review by the author.

A Light in the Window: An Irish Christmas Love Story

One stirs her pulse and the other her faith.

But who will win her heart?

Marceline Murphy is a gentle beauty with a well-founded aversion to rogues. But when two of Boston’s most notorious pursue her, she encounters a tug-of-war of the heart she isn’t expecting. Sam O’Rourke is the childhood hero she’s pined for, the brother of her best friend and a member of the large, boisterous family to which she longs to be a part. So when his best friend Patrick O’Connor joins in pursuit of her affections, the choice seems all too clear. Sam is from a family of faith and Patrick is not, two rogues whose wild ways clash head-on with Marcy’s—both in her faith and in her heart.

While overseeing the Christmas play fundraiser for the St. Mary’s parish soup kitchen—A Light in the Window—Marcy not only wrestles with her attraction to both men, but with her concern for their spiritual welfare. The play is based on the Irish custom of placing a candle in the window on Christmas Eve to welcome the Holy Family, and for Marcy, its message becomes deeply personal. Her grandmother Mima cautions her to guard her heart for the type of man who will respond to the “light in the window,” meaning the message of Christ in her heart. But when disaster strikes during the play, Marcy is destined to discover the truth of the play’s message first-hand when it becomes clear that although two men have professed their undying love, only one has truly responded to “the light in the window.”

Can the light in the window illuminate the path of true love?

Julie Lessman is an award-winning author whose tagline of “Passion With a Purpose” underscores her intense passion for both God and romance. Winner of the 2009 ACFW Debut Author of the Year and Holt Medallion Awards of Merit for Best First Book and Long Inspirational, Julie is also the recipient of 14 Romance Writers of America awards and was voted by readers as “Borders Best of 2009 So Far: Your Favorite Fiction.” 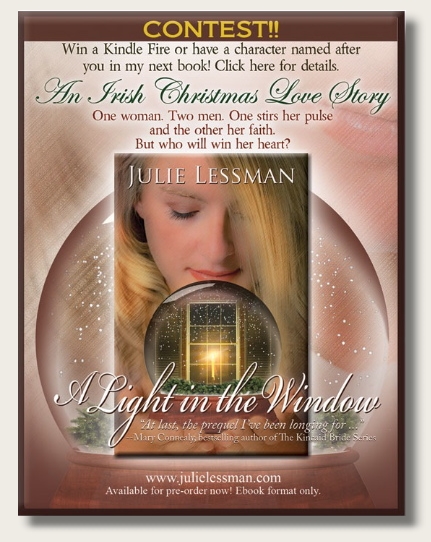