Strand of Deception by Robin Caroll 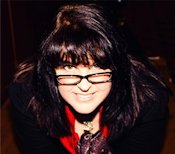 Born and raised in Louisiana, Robin Caroll is a southerner through and through. Her passion has always been to tell stories to entertain others. Robin’s mother, bless her heart, is a genealogist who instilled in Robin the deep love of family and pride of heritage—two aspects Robin weaves into each of her books.

When she isn’t writing, Robin spends time with her husband of twenty-plus years, her 3 beautiful daughters, 2 precious grandsons, and their character-filled pets at home—in the South, where else?

Learn more about Robin and her books on her Website.

When Gina Ford, the daughter of a prominent Tennessee politician, goes missing from the University of Memphis a week after another girl was murdered on the same campus, police call in the FBI. Nick Hagar, married to his job as Special Agent in Charge, is assigned to the case, and when Gina’s body is found, her father demands justice.

Maddie Baxter is the forensic expert running DNA tests from the crime scene. When they come back without a match, Nick asks her to do a familial DNA run that yields a shocking result: the prime suspect is Adam Alexander, the very same guy who broke Maddie’s heart when she was in college.

But do scientific advancements tell the whole story? Strand of Deception offers romance, suspense, and a lively debate about the impact of DNA testing, for better or worse, on the United States justice system.

If you would like to read the first chapter of Strand of Deception, go HERE.

I have enjoyed Robin’s books since I read her first Love Inspired Suspense novel. I was especially interested in Strand of Deception because of its Memphis, Tennessee setting because I have lived nearby my entire life. Being very familiar with the city, I am happy to say that Robin appears to have done her research well, describing locally favorite restaurants as well as a brief mention of two independent Memphis area churches, one of which I actually attended for several years. Her street names and locations were all spot on.

Aside from the local attraction, I found the novel itself to be well-written with a perfectly paced plot filled with several twists and surprises. Characters were realistic and believable and I enjoyed learning about forensic investigation processes. A couple of side stories kept things even more interesting. The romantic development between Maddie and Nick  was unhurried and natural. Nick was the perfect hero and I liked the way he was influenced by Maddie’s faith although she didn’t pressure him about it.

Once again Robin Caroll has written a suspense novel that held my attention until the very end and left me eager to read her next book. If you are a romantic suspense fan, Strand of Deception is a novel you should check out.