Enthusiastic but slightly untidy mother of two, Allie Pleiter writes both fiction and nonfiction. An avid knitter, harp player and non-reformed chocoholic, she spends her days writing books, doing laundry, running carpools and finding new ways to avoid housework. Allie grew up in Connecticut, holds a BS in speech from Northwestern University and currently lives in suburban Chicago, Illinois. The “dare from a friend” to begin writing eight years ago has blossomed into a career that includes numerous public speaking engagements, two books on parenting; Becoming a Chief Home Officer and Facing Every Mom’s Fears and now novels for Steeple Hill Books. She is the mother of two children and, most recently, a Havanese dog named Bella. 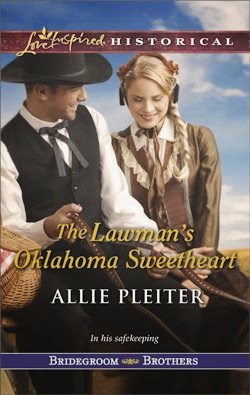 When Katrine Brinkerhoff’s cabin is attacked, only sheriff Clint Thornton’s heroism saves her. She owes Clint her life—and her help catching the men responsible. All she has to do is trust in Clint’s plan to protect her family. But she can’t let herself care too deeply, not when her past carries secrets that would drive him away.

Infiltrating the murderous gang is a dirty job, yet Clint is determined to see it through. The brigands will face justice—and they will never harm Katrine again. Clint would give his life to keep the beautiful settler safe…but will he be willing to risk his heart?

If you would like to read the first chapter of The Lawman’s Oklahoma Sweetheart, go HERE.

The Lawman’s Oklahoma Sweetheart is a fast-paced historical romance that takes place during the Oklahoma land grab. The story is filled with loads of action, danger, suspense, and of course romance. I had not read the previous two books of this series but it was obvious that if I had read it, several of the supporting characters would be familiar to me. Nevertheless, my enjoyment of this book did not suffer because I had not read the others. If time were to permit, I would probably enjoy reading them.

Both primary characters were strong and likeable. Katrine was lovely and appeared to be fragile but she had a backbone of iron. After Clint saved her life, she had no choice but to go along with his plans to keep her and her brother Lars safe from the men who threatened the entire area. Clint was a steadfast sheriff whose goal was to drive out the troublemakers and protect the town’s residents as well as those on surrounding farms. As Clint and Katrine spent more time together, their attraction grew but Clint held a personal secret that convinced him he should never marry. Would he be able to overcome his pain and let himself love Katrine? And will any of them survive the increasing violence of the men known as the Black Four?