Valley of the Shadow by Tom Pawlik

Valley of the Shadow 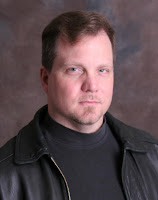 Tom Pawlik, winner of the 2006 Jerry B. Jenkins Christian Writers Guild’s Operation First Novel contest has drawn praise from critics with his first novel, Vanish. Novel Journey has declared, “Tom Pawlik writes a scary, fascinating, suspenseful story; one you won’t want to miss” and Faithful Reader said Vanish “…delivers a Christian message and certainly succeeds in stirring the imagination and the spirit.”

Tom Pawlik has a BA in communication and works in the marketing field. He has been active in Christian teaching, youth work, and music for over twenty years. In addition to writing fiction, Tom is an accomplished songwriter and musician who writes and records at his home studio. He and his wife, Colette, live in Ohio with their four children and a dog.

Darkness enveloped him. Thick and heavy, wrapping around him like a blanket. He could feel its weight pressing in on him. Squeezing him. Smothering him. And far off in the darkness, he heard sounds. A deep rumble mixed with a jumbled, muddied squawking. The noises were muffled and distant but growing steadily louder. Like a train approaching: the thunder of the engines and the clacking of its wheels on the tracks.

A pinprick of light blazed in the darkness. Tiny at first, but getting closer. Every second it grew larger and more intense. The sound roared now as the light rushed toward him and then . . .

Everything exploded into chaos.

Light and sound washed around him like a giant whirlpool. He could feel himself spinning inside it. Being buffeted and pulled along by a current.

And he was still freezing.

Lights flashed in his face. A dizzying array of reds and blues. Light and darkness. Shadows loomed over him and moved about. He tried to focus on the shadowy images as they swirled around him. Then he recognized them.

He was surrounded by people. Actual human beings! They were speaking to one another. Devon could hear distinct voices but still couldn’t make out the words. And the voices sounded worried. Anxious.

Devon’s vision was becoming clearer. Several people with uniforms and badges hovered over him. An ambulance was parked nearby, and two police cars, their lights flashing.

Paramedics? And cops? Was there an accident somewhere?

His mind was a jumble of thoughts and he tried to recall what had just happened. Images flashed through his mind. Terrifying ones. Disjointed and vague memories of huge, empty buildings. Skyscrapers. An entire city, void of life. A dull, overcast sky. Gray, faceless creatures reaching out hands with long, bony fingers like enormous spider legs.

Terrell. Where was Terrell? They had been together just a few days ago. Or had it been only a few minutes?

Devon tried to turn his head but couldn’t. Something was holding him in place. He struggled to move but was too weak.

He had to get out of here. He had to find Terrell.

He could hear the voices better now. One of them called for help. Something about a stretcher. Legs and feet shuffled out of view, then back in again. More lights.

Not far off, a row of strangers huddled together, watching. Devon scanned their faces, and one of them caught his eye. One face seemed out of place in the group. One man was standing off a little ways by himself. Standing in the shadows, staring right at Devon. His face seemed to draw Devon’s gaze toward him, as if pulling him down into a pit.

It was long and narrow. Pale skin almost glowed against the shadows behind him. His cheeks were gaunt and sunken. And his eyes . . .

His eyes shone a pale yellow. But they seemed hollow. Then he smiled. His thin, puckered mouth expanded into a wide grin. Rows of brown, rotted teeth dripped with black saliva.

Devon couldn’t take his eyes off the man. Then someone passed between them and he was gone.

Suddenly Devon felt himself moving. Floating. He could see several people standing around him. Cops and paramedics. They slid him into an enclosed space where white light surrounded him. Two people climbed up beside him.

What was going on?

Devon heard doors slam shut with a thud and a click. A moment later, he could feel himself moving again.

His eyes widened and his breathing grew more rapid. The crowd. The paramedics. The cops . . .

They were there for him!

They had put him into the ambulance!

He was pressing something against Devon’s chest. Devon glanced down. Now in the light he could see his shirt was cut open and drenched in blood. A large, white piece of gauze was taped to his chest.

Devon looked back up at the medic and his breath caught in his throat.

The man’s face had changed. His eyes glowed yellow. His lips parted in a twisted grin, showing dozens of teeth. Dark and rotted, all jammed together in his mouth. Black liquid, like tar, dripped onto his chin.

“The door is still open,” he croaked. His voice was gargled and deep.

He felt a hand on his forehead and opened his eyes again. The medic’s face had returned to normal. The guy was working on Devon as if nothing had happened.

Devon tried to slow his breathing. His chest burned and a sharp pain knifed through his ribs with every breath. He struggled for air as darkness began to close in around him. Sounds grew muffled. The medic’s voice sounded urgent but began to fade. Devon could feel them moving around, trying to save him.

And he could feel himself slipping away.

Excerpted from Valley of the Shadow by Tom Pawlik. Copyright© 2009 by Tom Pawlik. Printed with permission from Tyndale House Publishers. All Rights Reserved.

Valley of the Shadow is the sequel to Vanish, Tom Pawlik’s first novel; however enough details are given that the reader is not lost if he missed the first one. I have not had the opportunity to read Vanish and I was able to follow the storyline just fine.

The plot switches between people and events on earth and people trapped in the interworld, the shadowy world between life and death. Residents of the interworld exist in an alternate reality that appears to be a predominately deserted but familiar world where people suddenly appear and disappear or are dragged off by malevolent alien beings.

Valley of the Shadow is a true pageturner that aptly illustrates the very real battle between darkness and light.  Characters vary from one man willing to risk all to save a stranger met in the interworld from hell to another man resident  in the interworld who has made a deal with Death thinking to save his own life. The action moves quickly, building suspense as it progresses. Valley of the Shadow has a strong spiritual message and will leave the reader with plenty to ponder for awhile after the last page.