The Ticket by Debra Jeter

This week, the
Christian Fiction Blog Alliance
is introducing
The Ticket
Firefly Southern Fiction (May 20, 2015)
by
Debra Jeter

A Vanderbilt University professor, Debra Coleman Jeter has published fiction and nonfiction in popular magazines, including Working Woman, New Woman, Self, Home Life, Savvy, Christian Woman, and American Baby. Her story, “Recovery,” won first prize in a Christian Woman short story competition, and her nonfiction book “Pshaw, It’s Me Grandson”: Tales of a Young Actor was a finalist in the 2007 USA Book News Awards. She is a co-writer of the screenplay for Jess + Moss, a feature film which premiered in 2011 at the Sundance Film Festival, screened at nearly forty film festivals around the world, and captured several international awards. She lives in Clarksville, Tennessee, with her husband. She is currently working on a novel based on the life of her grandmother, Effie Shultz McClain (1900 to 1985). 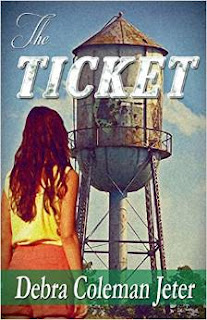 Tray Dunaway longs to be part of the popular set at school but, she’s growing too fast and her clothes no longer fit. The only person who understands Tray’s need for acceptance is her grandmother, but when Tray wears Gram’s hand-sewn clothes to school, the kids make fun of her tall, boney appearance. Tray’s luck improves when Pee Wee Johnson, a down-and-out friend of her father’s, buys two lottery tickets and gives one to Mr. Dunaway as a thank-you for driving him to Hazard, Illinois. When her father’s ticket turns out to be the winner, Johnson demands his cut of the proceeds, but Tray’s dad refuses. What seems like a stroke of good fortune suddenly becomes a disturbing turn of events as Johnson threatens to cause problems for the family and Tray.

If you’d like to read the first chapter of The Ticket, go HERE.