This week, the
Christian Fiction Blog Alliance
is introducing
Lightning
Revell (October 6, 2015)
by
Bonnie S. Calhoun
ABOUT THE AUTHOR: 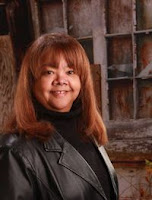 She loves to write with body count, blood, or blowing things up. She also has mad skills at coding HTML, and website design. And she lives in a log cabin in the woods with fifteen acres and a pond full of bass, though she’d rather buy fish at the grocery store. Bonnie shares her domain with a husband and two cats, all of whom think she’s waitstaff!

Her latest series is a YA dystopian with Revell titled Stone Braide Chronicles. The first book Thunder published in 2014. The second book Lightning published Oct 2015. There are also two FREE e-book short stories. Tremors is the prequel to Thunder, and Aftershock (short story) comes before Lightning.

After she found her real father, life for Selah should have felt settled. But the horrors have just begun. In her broken world of toxic earth and tribal clashes, Selah must battle the forces of nature alongside those in the Mountain who are calling for her blood. Haunted by the pain of mounting losses, she forges on, seeking her lost family and
uncovering new mysteries. But the ultimate betrayal of her own body may soon make her quest impossible as it becomes apparent that what has made her new could also drive her to a life of madness.

If you would like to read the first chapter of Lightning, go HERE.