Promise to Keep by Elizabeth Younts

This week, the
Christian Fiction Blog Alliance
is introducing
Promise to Keep
Howard Books (October 13, 2015)
by
Elizabeth Younts
ABOUT THE AUTHOR:

A Word from the Author:

I’m Elizabeth, a blessed child of The King. I’m a middle-born daughter, military officer’s wife, homeschooling mama, writer, closet DIYer, and, dare I say it, Downton Abbey addict. May I also mention that I love both my history and my coffee rich.

I am formerly Amish and my heritage is very dear to me and thankful to be so accepted among my still Amish family. I can still speak PA Dutch, too! You can learn more about my Amish family in my first book Seasons: A Real Story of an Amish Girl.

My three book series with Howard Books (a division of Simon & Schuster) is a dream come true. The series is titled The Promise of Sunrise. In this series you will live through World War 2 from an Amish perspective and experience their unique struggles as conscientious objectors during wartime. What happened if one of their members enlisted? What was it like to serve at the Civilian Public Service Camps for years with almost no compensation? How did Amish women and families cope when a son or father was drafted? I look forward to taking you back into the richness of these years of Amish history through fiction.

Learn more about Elizabeth Byler Younts and her books on her website. 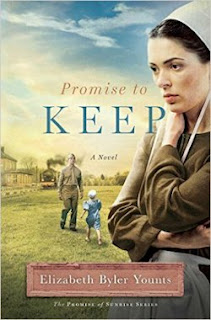 World War II Marine Joe Garrison returns home from war longing to be a father to his deaf daughter, Daisy, only to find that she is attached to Esther Detweiler, the Amish woman who has raised her since his wife’s death in this touching historical romance.

Orphaned as a child, Esther Detweiler is used to caring for herself and her ailing grandmother. They made the best out of a hard life and poverty without asking for help. They even take in her shunned cousin’s deaf daughter, Daisy, when her mother dies and her father goes off to war. When Esther’s grandmother dies, Daisy is all she has.

When war veteran Joe Garrison returns, all he can think about is recovering from the horrors of war and building a relationship with his seven-year-old daughter. Daisy, however, is unwilling to leave Esther, whom she loves. Joe and Daisy get to know each other again, but Joe struggles with nightmares and fatherhood is proving to be more difficult than he imagined. Esther loves Daisy and despite her Amish ways, Joe finds himself drawn to her as a woman and not just a caregiver.

As their love blossoms, Joe decides to send Daisy away to a school for the deaf which propels their lives into turmoil and a battle for love and family.

If you would like to read the first chapter of Promise to Keep, go HERE.