The Transformation by Terri Kraus

An award-winning interior designer, Terri Kraus comes to the Project Restoration series naturally, having survived the remodel, renovation, and restoration of three separate personal residences, along with those of her clients. The author/coauthor (with husband, Jim) of eleven other novels, including The Renovation and The Renewal, Terri lives in Wheaton, Illinois, with her husband and son, Elliot. 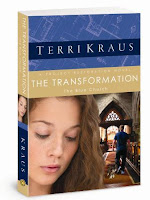 Oliver checked his watch. He squinted and positioned his wrist nearer to the glow of the truck’s speedometer.

Oliver knew it was much too early to be wandering around in a strange neighborhood, but heavy Pittsburgh traffic—even the threat of heavy traffic—gave him the willies. Leaving his home later in the morning meant heavy traffic, probably normal for everyone, but not normal for Oliver. Navigating his pickup through dense packs of automobiles was far removed from Oliver’s comfort zone.

He might risk the drive into Pittsburgh from Jeannette for a funeral or a wedding, or maybe a Steelers’ football game (if someone gave him free tickets), but not much else. Why risk life, limb, and sanity?

So today, Oliver had attempted to beat the traffic and the stress. He had gotten up at 4:30, not that much earlier than his normal get-up time, had picked up a cup of Dunkin’ Donuts coffee at the store a mile from his house, and had driven in the shimmery dark down Route 30. Traffic was light as he entered the flickering fluorescent-lit Squirrel Hill tunnel. Then, following his GPS, which he’d begun to rely on but did not always trust, he’d crept along a baffling series of residential streets until he arrived at his destination. The voice from the GPS unit seemed more chipper than he remembered in announcing his successful journey.

“Destination ahead. You have reached your destination.”

He pulled to the curb, scanning for street signs.

Cities have all sorts of laws about where you can and can’t park and when, he remembered. And I’m not about to get a ticket just giving someone a free estimate.

He looked about again, turning sideways in the seat.

I can’t just sit in the truck. That might look like I’m—what do they call it?—casing the place. I am, sort of—but not in that way.

He got out of the truck, jogged down the block, back to the front of his truck, then halfway up the block.

“No signs,” he said softly. “That’s odd. Should be some sort of parking sign.”

Oliver really disliked getting traffic tickets. He had received one speeding ticket in the last decade, but his parking violations occurred more frequently. Contractors sometimes had to double-park or park on sidewalks. He hated seeing a fluttering yellow slip, lying in wait with a bad day written all over it, snuggled under his windshield wiper.

“It must be okay to park here then,” he said out loud.

He walked slowly back towards his truck, tapped at the passenger side window, and nearly pressed his face to the glass.

“Come on, Robert. Let’s get started on the estimate.”

Robert lifted his head and shook himself awake, blinking. He had slept the entire trip. Not that the trip was that long, but he most often napped during any ride longer than ten minutes. He scrambled to his feet and stretched slowly and carefully.

Robert was Oliver’s dog. Most often Oliver and a fair number of his friends and coworkers would say “Robert the Dog” when speaking about Robert the Dog, as opposed to just “Robert,” because there were several other Roberts inhabiting Oliver’s circle of friends. No one wanted to confuse man and dog—least of all, Oliver. Oliver actually liked the sound of that three-word name and began to use “Robert the Dog” almost exclusively, except when they were alone, like this morning.

Robert the Dog clambered down from the seat to the floor of the truck and jumped out to the curb, sniffing the air, the grass, the truck, and finally, Oliver’s shoe. He might have been a pure-bred schnauzer but was the size of at least one and a half miniature schnauzers combined, though not as large as the giant variety, and his hair was mostly black. His head was almost the right schnauzer shape—not perfect to the breed, but close—so Oliver assumed a very small amount of some sort of nonschnauzer lineage had found its way into the good dog Robert.

Ever since Oliver had rescued Robert from the pound as a puppy, the two had gone everywhere and done everything together, including evaluating a new project . . . a possible new project. In construction, Oliver found, nothing was certain until the contract was signed—and even then, things could happen.

Oliver did not have to worry about Robert the Dog taking off, running into traffic, or barking at the wrong time. Robert had never done any of those things and, more than likely, would not start demonstrating inappropriate behaviors this early on a still sunless Monday in Shadyside, just on the outskirts of Pittsburgh.

“But this is a church,” he said to Robert the Dog.

Robert simply stared at the building, sniffing the cool morning air, as if he were not really interested

When Samantha Cohen had left her message five days ago, she had said her new acquisition, her latest renovation project, was a church building. She planned on transforming it, doing “wonderful things” with it. Oliver had imagined a small frame building, a church-like building that might be easily changed into a gallery or antique shop—but not a heavy, old historic church-to-the-very-rafters sort of building.

“Can you meet me Monday morning?” Miss Cohen had said, her voice deep and raspy, in a memorable, alluring, black-and-white Lauren-Bacall-movie sort of way. “I really need to talk this project through. Alice and Frank Adams, my friends in Butler, just raved about your work. Said you were brilliant with their displays and cabinets and all types of furnishings. I need brilliant. I’m willing to pay for brilliant. So Monday. Early. If you can make it. Leave me a return message. I’ll get it, even if I don’t call you back. I’m a little OC when it comes to checking messages.”

Oliver had left a return message: “Early Monday. Sevenish? I might be there before seven just to look around the outside, if that’s okay with you. I get up early.”

What he was now staring at in the early light, and what Robert was sniffing, was an historically significant church. No one could lay eyes on this building, even in the dark on a foggy night, and see anything other than a rock-solid church. This was a church with a capital C. It had massive stone arches; huge stained-glass windows that traversed the sides of the church; a rotunda that certainly must hold the altar. There was a covered entranceway (the port cochere, Oliver knew it was called) done in huge stone blocks and a high tower with a cross and carillon.

Just standing there, thinking about remodeling the old structure into something other than a place of worship, gave Oliver a case of spiritual heebie-jeebies. “This is a church,” he repeated again.

He stood, wrapped in that early morning silence that occurs even in big cities, like the soft, fragile, and short-in-duration crease in the day between the dark and its dark noises and the early morning let’s-get-the-commute-going sort of noises. Oliver wondered if he should just get back in his truck, pretend that he had never made the mistake of answering the phone message from Samantha Cohen, and move on to the next job.

I’ll be tearing apart a church. God’s house, where people have worshipped for what must be over a century.

He wanted to sigh, but did not.

My mother will die if she finds out.

Oliver wondered, for just one split of a split second, if he could keep this job secret. Not that he liked keeping secrets from his mother, but sometimes parents could not be trusted to handle sensitive news.

Or I could walk away and wait for the next job. That actually might be easier . . . safer . . . less stressful.

Except he did not have a next job. He could wait, wait for the next big nonchurch job, but there was no guarantee another one would come quickly, and in these sorts of wobbly economic times, Oliver knew he could not be picky.

And he was here; he’d already endured the traffic. He would stay. He’d do the estimate.

There’s something about this place. . . .

Now his words were softer, perhaps because of the silence. “A church . . . but, well, she did say it used to be a church.”

The holes in the stone façade were still visible where a sign had once hung.

“It’s just a building now.” He looked down at Robert the Dog. “Right, Robert? It’s not a church anymore. Right?”

Robert looked up, as if considering Oliver’s options, sniffed again, and then sneezed in a very uncanine-like manner.

©2009 Cook Communications Ministries. The Transformation by Terri Kraus. Used with permission. May not be further reproduced. All rights reserved.

The Transformation is a multi-dimensional book that is deeper than first glance would indicate. As the title suggests, the story is about the transformation of an unused church into a restaurant. But it is so much more than that – it is about changed lives.

The principle character is Oliver, a building contractor who is also dedicated to serving God the best way he can. Although he has his doubts about the suitability of converting a place of worship into a secular business, he feels that he is supposed to do it.  Along the way he encounters several people who become a part of his life, some who change it and some whose lives he influences. Meanwhile back at home, he has to deal with an overbearing mother, a jealous, conniving brother, and an old girlfriend who is doing everything she can to get Oliver to the alter.

The Transformation is an entertaining yet thought provoking read. I admired Oliver for sticking to his principles yet became frustrated that he wasn’t more assertive with his mother and Paula. I also enjoyed seeing the changes in Samantha as she was exposed to Oliver and some of the other characters. The Transformation is a wonderful story about redemption and restoration that has a truly satisfying conclusion.