It is time to play a Wild Card! Every now and then, a book that I have chosen to read is going to pop up as a FIRST Wild Card Tour. Get dealt into the game! (Just click the button!) Wild Card Tours feature an author and his/her book’s FIRST chapter! 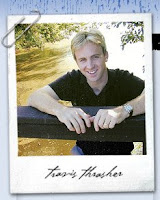 Born in Knoxville, TN, Travis Thrasher knew in third grade he wanted to be a writer and wrote his first novel in ninth grade. Tyndale House Publishers signed his first novel, The Promise Remains, which released in 2000. Today, Travis has nine books in print. He and his wife, Sharon, live with their daughter in Chicago, IL. 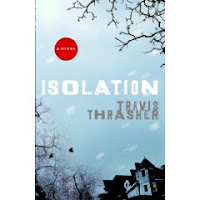 The Stranger in the House

A loud crash woke her. It came from outside their bedroom, but she wasn’t sure where. Stephanie jerked and turned onto her back, opening her eyes and adjusting to the pitch black. Next to her Jim’s heavy sleep floated somewhere between snoring and ragged breathing. She called out his name twice, but he wouldn’t wake at this hour unless she tugged at him. He was a big man who didn’t go to sleep easily, but once he did, he stayed asleep.

She slipped out from under the bed’s massive covers, and the chill of the winter night greeted her. The wind blew hard against the house, and she wondered if it was still snowing. The first few days in January had been particularly brutal, and they were forecasting another round of snow for Chicago that weekend.

I know I heard something, and I know I’m awake this time. I’m not sleepwalking.

The doorknob felt hard and cold as she turned it and opened the door. She walked down the hallway, a small night-light illuminating the floor.

This house had four bedrooms, and they had put Ashley in the room closest to theirs. Ash and Zachary were still adjusting to separate rooms after being cramped together in their tiny room in Dambi. Sometimes Ashley still wanted to sleep with them, a habit that was hard to break and even harder to argue with now that they were in a new house.

They had been here since September, but it still didn’t feel like home. The furniture had been picked out by someone else years ago. The house itself felt like a model home, one of those you toured but never lived in. It looked like it was trying to have the feel of a home but didn’t really get it.

Ashley lay in her bed with half the covers off. Stephanie put them back over her and made sure she could hear her breathing. She always did that with her kids, even though they were five and eight. Ashley was her baby and always would be.

What about another one?

She could hear Jim’s question but knew she was through. She dearly loved her children, but she didn’t want another. Men just couldn’t understand the pain and the emotional journey of having a baby. Maybe it was selfish, but she knew she couldn’t go through another nine months of that if she had doubts.

She walked down to Zachary’s room. It felt colder than the rest of the house for some reason, and she couldn’t help shivering as she entered the room.

Zach breathed heavily, but that was because he was coming off a nasty sinus infection. Everything in the room looked fine. By the glow of the small night-light, she could see him tucked under the covers—his eyes closed, his dark brown hair messy.

Her heart leaped a little as she looked at him. Even though she wasn’t supposed to have a favorite, she knew she loved Zachary a little more than Ashley. She would never tell another soul this, but she knew God could see. She couldn’t help it. Zachary was her first and had been an answer to prayer and was just . . . he was Zach. He was special.

That’s what Jim said, but sometimes she didn’t know. Zach was restless and outgoing and inquisitive, so, yes, sure, he took after her more than after Jim’s quiet, deep persona. But there was something about Zach that was nothing like her, that wasn’t like anybody.

He’s a fifty-year-old man in the body of an eight-year-old.

She lost herself looking at her son when she heard another noise. This one came from downstairs, in the kitchen. It sounded like something had fallen.

Her heart raced and she tiptoed to the top of the stairs, where she just stood and listened. She wondered about racing to get Jim, but she knew he would think she was sleepwalking and would tell her to go back to bed. Sure, she had dreams—nightmares—every now and then, but this was real. She was awake. Her bare feet could feel the soft carpet underneath them, a foreign luxury that took a while to get used to after coming back from Papua New Guinea. Her eyes adjusted to the darkness. She looked downstairs but could see nothing.

She slowly made her way down the steps, one after another.

She knew, she believed.

So why was she walking down there? She was the mother of the house. This was crazy. If someone were there, she shouldn’t be going to greet them.

She reached the bottom of the stairs, then held her breath and listened. Nothing. Her hands shook, and she couldn’t see anything except the light on the old VCR showing the time of 3:14 am.

She flipped the light switch, expecting to see a man in black standing in the middle of the kitchen. Her heart raced as she stood at the base of the stairs, the light illuminating the family room and kitchen.

Stephanie walked over to the kitchen and stood in the middle near the island, looking around. There was nobody to see, nothing on the wood floor. No stray pot that had fallen or pan that was out of place.

She needed to calm down. She opened the refrigerator to get some milk, then saw something out of the corner of her eye.

Something shadowy and black and big and quick.

Something heading for the stairs.

She stiffened, not sure what she had just seen.

She heard movement on the carpeted steps, as though it were Jim heading up the stairs. The footsteps were quick, like someone was running.

Stephanie’s body froze, and she could only turn her head. She spotted the set of knives she used for cooking, one of the few things she enjoyed doing in this house. For one brief second, she couldn’t move or think or do anything. But then she heard the steps find their way to the hallway

to the kids’ rooms

and with the creaking sound in the hallway right outside Zach’s room, Stephanie jerked into motion.

She grabbed the largest knife in the set and clenched it as she ran up the stairs.

She rushed into Zach’s room and held the knife out in the darkness. She turned around. Nobody there but her child.

She ran to Ashley’s room.

I know what I heard and saw. I know it.

She stood in the middle of Ashley’s room, looking quickly toward the doorway and to the hallway outside.

Suddenly she saw a figure glide by.

She felt very cold, a cold deep under her skin.

Stephanie charged out of the room and rushed down the hall back to Zach’s room. This time, the bed was empty, the covers turned over, the room deserted.

For a second she just stood there in horror.

She felt her legs grow weak until she had to kneel on the floor. She took in a breath and felt light-headed, but kept the knife tightly clenched in her hand.

Where’d he go? Where’d they take him?

As she panted for air, a sound rose from behind her. She jerked around with her knife to face the doorway and suddenly found herself blinded by bright light. She squinted and discerned an ominous figure in the doorway.

“Don’t! I swear!” she said, waving the knife toward the doorway.

She looked up and saw the beard first, then the eyes, bigger than usual, then the balding head. The voice hadn’t just asked her to drop the knife. It had issued a command, a deep and booming command that jerked her

and made her drop the knife.

Jim stood at the doorway. The light to Zach’s room was on.

He came to her side and picked up the knife.

“What are you doing?” he asked as he helped her up.

“It’s Zach. I saw someone—heard something—then I looked and someone was coming up—I didn’t know—”

She turned to see Zach in his bed, his hair shaped like a mushroom, his eyes wide open and adjusting to the light.

“What were you doing with this knife?”

“I was scared somebody—”

“Steph. You’ve got to get some help. This is really—”

He stopped, obviously noticing that Zachary was hanging on every word. Jim laid the knife on the small dresser and went over to their son.

“Hey, buddy. It’s okay. Mommy was just having another dream.”

Zach nodded and looked at her. “Mom, are you okay?”

As she went to kiss Zach, she saw his frightened look.

“Get some sleep, buddy. Okay?” Jim tucked him in and took the knife from the dresser. He turned off the lights and went downstairs.

Stephanie found her way back to bed. She lay on her back, feeling as awake as she had been when she first heard the noise.

Jim came back into the room and didn’t bother turning on the light. He climbed into bed and laid there in silence.

There was more silence, and she wondered what he was thinking.

She could tell he was thinking, wondering whether to say something.

“James?” she asked, trying to get him to respond.

“I just found you in our son’s room, hovering over him with a knife. With a knife.”

Fear raced through Stephanie, and it wasn’t at Jim’s words. It was at the way he said them. He spoke them as though he was angry at her, as though she were a stranger and not the woman he loved, who had given birth to these children.

She could hear the fear in Jim’s voice. And that scared her the most.

Jim was never scared. Of anything.

This article is used with the permission of Hachette Book Group and Travis Thrasher. All rights reserved.