Award-winning author Lisa Harris has been writing both fiction and nonfiction since 2000 and has more than fifteen novels and novellas in print. She currently lives with her family in Mozambique, Africa, where they work as missionaries.

Have you ever noticed how God often uses ordinary people to do extraordinary things? In writing Blood Ransom, I wanted my heroes and heroines to be ordinary people, faced with extraordinary circumstances. Chad and Natalie’s lives were changed not only through the challenges they faced, but also through their reliance on God. And when they set off on their journey to the capital to save Joseph’s family, they never imagined that God would call them to a task that was beyond the scope of their own power.

But while this story is fictional, the issue of a modern day slave trade is very real. It is estimated that there are currently more than 27 million slaves on the world today from Africa, to Eastern Europe … to the United States of America. The fact is, we don’t have to travel around the world to see people hurting and exploited. They’re real people we pass every day, living in our neighborhoods, and attending our churches and schools. They’re empty and broken, searching for freedom and hope in an often hopeless world. 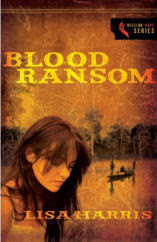 Natalie Sinclair is working to eradicate the diseases decimating whole villages in the Republic of Dhambizao when she meets Dr. Chad Talcott, a surgeon on sabbatical from a lucrative medical practice now volunteering at a small clinic.

Meanwhile, things are unraveling in Dhambizao. Joseph Komboli returns to his village to discover rebel soldiers abducting his family and friends. Those that were too old or weak to work lay motionless in the African soil. When Chad and Natalie decide to help Joseph expose this modern-day slave trade—and a high-ranking political figure involved in it—disaster nips at their heels.

Where is God in the chaos? Will Chad, Natalie, and Joseph win their race against time?

Romance and adventure drive Blood Ransom, by Lisa Harris, a powerful thriller about the modern-day slave trade and those who dare to challenge it.

If you would like to read the prologue and first chapter of Blood Ransom, go HERE.

I’ll admit that I nearly passed on reading this due to time constraints because I knew I could just do the required cut and paste. Fortunately I found a little extra time and decided to read Blood Ransom. I am so glad I did.

Blood Ransom is a very intense, suspenseful novel set in the Republic of Dhambizao. When Natalie is told of the abduction of an entire African village as well as the murder of several of the villagers by “ghost soldiers”, her conscience won’t let her do the safe thing and not get involved. When she shows the proof to her new friend Chad, he too becomes involved in helping Joseph find his family and trying to get the evidence to the proper authorities. Unfortunately, in the volatile political atmosphere immediately before a national election, it is nearly impossible to know who to trust in the midst of so much corruption. Their involvement takes the trio into unimagined danger as they race against the clock to help prevent a country wide civil war.

Excellent characters, vivid settings, and a fast-moving plot make Blood Ransom an enjoyable read. Although fictional, the book illustrates the very real problem of human slavery and should give the reader some food for prayer at the very least.