Since 2000, Shelley Sabga has sold twenty-six novels to numerous publishers. She has written a seven book contemporary series for Avalon books. She also published The Love Letter, a western for Avalon. Five Star Expressions published Suddenly, You in February of 2007. This novel is a historical western set in the mountains of Colorado.

Shelley has written nine novels for Harlequin American Romance. Cinderella Christmas, her first novel with them, reached number six on the Waldenbooks Bestseller list. Her second book with them, Simple Gifts won RT Magazine’s Reviewer’s Choice award for best Harlequin American Romance of 2006. The Mommy Bride, was chosen by Romantic Times Magazine as one of their TOP PICKS for May, 2008.

Under the name Shelley Shepard Gray, Shelley writes Amish romances for Harper Collins’ inspirational line, Avon Inspire. HIDDEN and WANTED the first two novels of her ‘Sisters of the Heart’ series, were chosen to be Alternate Selections for the Doubleday/ Literary Guild Book Club. FORGIVEN, book 3, has received glowing reviews. Avon Inspire will release four novels by Shelley in 2010.

Before writing romances, Shelley lived in Texas and Colorado, where she taught school and earned both her bachelors and masters degrees in education. She now lives in southern Ohio and writes full time. Shelley is married, the mother of two teenagers, and is an active member of her church. 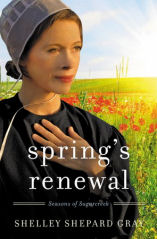 Tim Graber arrives in Sugarcreek to help his aunt and uncle with spring planting. At first, Tim doesn’t fit in with his many cousins and their crowded lifestyle. But when he meets Clara Slabaugh, the local school teacher, he understands why the Lord brought him to Sugarcreek.

Clara is shy and quiet. Scarred from a fire when she was small, Clara has resigned herself to living alone and caring for her mother, who tells her that no man will ever see past her scars, and that Clara needs to keep teaching in order to make ends meet.

Her father passed away years ago, and her mother depends on her. But the scars mean nothing to Tim. He appreciates her quiet nature and her wonderful, loving way with children. Yet Tim has a sweetheart back home in Indiana. As these two hearts struggle to determine their path, tragedy strikes, and every other worry seems insignificant in comparison.

Though they now face a life they never imagined, will Tim and Clara have the faith to step out and risk everything for a chance at true love?

If you would like to read the first chapter of Spring’s Renewal, go HERE.