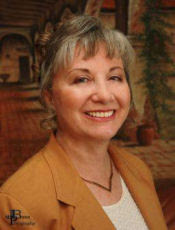 Kathi Macias is an award-winning author of more than twenty fiction and nonfiction books. She has also ghostwritten and collaborated on books for a number of well-known individuals. She is a staff member for The Christian Communicator Manuscript Critique Service and a member of The Christian Proofreaders and Editors Network, Christian Authors Network, American Christian Fiction Writers, Christian Writers Fellowship International, Advanced Writers/Speakers Association, for who she serves as membership chair, and orange County Christian Writers Fellowship. She is the 2008 winner of AWSA’s Golden Scroll Award.

A Former newspaper columnist and string reporter, Macias is a credentialed minister and served as an associate pastor at a large church in Southern California, where she did biblical counseling, trained small group leaders, and oversaw support/recovery ministries. She is a popular speaker at churches, women’s clubs and retreats, and writers’ conferences, and has appeared on several radio and TV programs.

…(set in South Africa in 1989, during the violence and turmoil just prior to Nelson Mandela’s release from prison and the overthrow of Apartheid.
Forbidden romance, an unlikely martyr and an even more unlikely hero. Orphaned four years earlier when their parents, active in the African National Congress ANC movement against apartheid were murdered, 16-year-old Chioma and her 15-year-old brother Masozi now live and work on an Afrikaner family’s farm. When Chioma and Andrew, the farm owners son, find themselves attracted to one another, tragedy revisits their lives. Chioma escapes to join an ANC rebel band in her effort to survive and gain revenge for her family and culture. When cultures clash in life-or-death struggles, Chioma must choose between violence and revenge or forgiveness and selfless love. Loosely based on historical events and set near Pretoria, South Africa, in the violent upheaval prior to ANC leader Nelson Mandela’s release from prison in 1990 and his ascendance to the presidency of South Africa, this story of forbidden romance produces an unlikely martyr who is replaced by one even more unlikely.

If you would like to read the Prologue and first Chapter of No Greater Love, go HERE.

…(set in Tijuana, Mexico, and also in San Juan Chamula, Mexico, which is deep in the heart of Mayan country)
True love ignites their passionate pursuit of His call With violent crime on the rise and the political climate changing throughout certain parts of Mexico, the opportunity for open Christian witness, particularly in some areas of Chiapas State, is rapidly decreasing. Hector Rodriguez pastors a small church in the tourist-popular border town of Tijuana. He also routinely carries Bibles deeper into the hostile areas of Mexico, where he ministers despite increasing difficulty and persecution. Hectors mother accompanied him on one of those trips and felt God called her to stay in the little village of San Juan Chamula, where she uses the Scriptures to teach reading to the families who are open to it. In retaliation for Hectors bringing the Bibles into areas hostile to Christians and in an effort to dissuade him from continuing to expand his ministry there, Hectors mother is murdered. Hector must decide if he will continue his work despite his worries about protecting his wife and children.

If you would like to read the Prologue and first Chapter of More Than Conquerors, go HERE.

I have only been able to get the first book No Greater Love read so far. I found it easy to read and full of insight into the turbulent era of South Africa known as Apartheid. As an American far removed from that part of the world, I never gave much thought to what was happening there. I knew only the basic facts and if I thought about it at all, I pretty much equated it with the racial tension in the South where I have spent my entire life. No Greater Love was both educational and suspenseful with a storyline that challenges your faith.

After reading the book, I did have a bit of a problem with the promotional description of  “forbidden romance”.  The relationship between the only two people this statement could even apply to never developed into a romance – there were only about two actual conversations between them. So if you are expecting a romance, you should probably skip this book. There is nothing in it that I would consider a romance and the subject matter is deep and intense. That said, No Greater Love is an excellent book that does a good job of getting its message across.