The first thing about This Fine Life that grabbed my attention was the cover. I was a small child during the time frame for this book and I can remember my mother, grandmother, and other women in my life in similar attire – pearls, white gloves, and all. My grandmother actually wore her heels around the house while she did her daily chores. I can still remember life as it was during the late 50’s in the south, even if it is from a child’s point of view. I can truthfully say that This Fine Life “felt” right.

This Fine Life is the story of Mariette who unexpectedly falls in love with Blayne who does not meet her parents’ demanding standards. After they secretly marry, the bloom quickly fades as the realities of daily life take precedence. When Blayne decides he has been called as a pastor, life becomes even more difficult for the couple, especially as Mariette is unable to understand the importance of the gospel in her husband’s life. More difficulties arise when Blayne accepts his first pastorate in a tiny country town that is totally foreign to Mariette’s experience.

A charming story of love and dedication, This Fine Life narrates the lives of Mariette and Blayne through good times and bad as they determine to stay together no matter what. My only complaint is that I thought it ended rather abruptly with too many strings being tied up neatly without enough details. In spite of that, I would recommend This Fine Life, especially to those who would like to take a step back into our not so distant past.

This book was provided for review by Revell, a division of Baker Publishing Group. 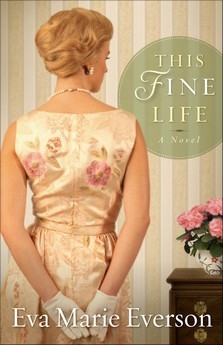 This Fine Life is a stand-alone novel by popular author Eva Marie Everson that transports readers to small-town Georgia in 1959: Mariette Puttnam has just graduated from boarding school during the summer of 1959. When she returns to her privileged life at home, she isn’t sure where life will take her. More schooling? A job? Marriage? Nothing feels right. How could she know that the answer is waiting for her within the narrow stairwell of her father’s apparel factory, exactly between the third and fourth floors?

In this unique and tender story of an unlikely romance, Everson takes readers on a journey through the heart of a young woman bound for the unknown. Readers will experience the joys of new love, the perseverance of true friendship, and the gift of forgiveness that comes from a truly fine life.

“This Fine Life proves that growing into love can rip one apart, quitting might be the easiest thing, but walking away is out of the question. I bled with these characters as they struggled to become who they were meant to be. So real and so true to life.” —Lauraine Snelling, author, Daughters of Blessing 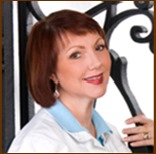 Eva Marie Everson grew up in a rural southern town in Georgia just outside of Savannah. She is married, has four children and five grandchildren, and lives in Central Florida. She taught Old Testament theology for six years at Life Training Center in Longwood, Florida and has written numerous articles for Crosswalk.com (including the acclaimed Falling Into The Bible series), and has had articles featured in numerous publications, including Christianity Today, Evangel, Christian Bride, Christian Retailing,, The Godly BusinessWoman and Marriage Partnership magazines. Eva Marie has been interviewed by radio, television, newspaper, and Internet media outlets. In 2002 Eva Marie was one of six Christian journalists sent to Israel for a special ten-day press tour. She was forever changed.

Writer of Books, Author of None

Eva Marie is a graduate & student of Andersonville Theological Seminary, past-president of AWSA’s (Advanced Writers & Speakers Association) steering committee and the recipient of their Member of the Year Award for 2002, past president of Word Weavers, a mentor with Christian Writers Guild, a graduate of CLASS, a past panelist for The Writers View-2, and a member of a number of organizations for writers. She speaks and has spoken both nationally and internationally.

Available May 2010 at your favorite bookseller from Revell, a division of Baker Publishing Group.