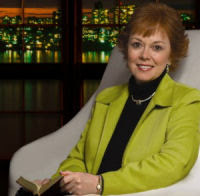 Terri Blackstock’s books have sold six million copies worldwide. Her suspense novels often debut at number one on the Christian fiction best-seller lists, and True Light, published last year, was number one of all Christian books—fiction and non-fiction. Blackstock has had twenty-five years of success as a novelist.

In 1994 Blackstock was writing for publishers such as HarperCollins, Harlequin and Silhouette, when a spiritual awakening drew her into the Christian market. Since that time, she’s written over thirty Christian titles, in addition to the thirty-two she had in the secular market. Her most recent books are the four in her acclaimed Restoration Series, which includes Last Light, Night Light, True Light and Dawn’s Light. She is also known for her popular Newpointe 911 and Cape Refuge Series.

In addition to her suspense novels, she has written a number of novels in the women’s fiction genre, including Covenant Child, which was chosen as one of the first Women of Faith novels, and her Seasons Series written with Beverly LaHaye, wife of Tim LaHaye.

Blackstock has won the Retailer’s Choice Award and has appeared on national television programs such as The 700 Club, Home Life, and At Home Live with Chuck and Jenny. She has been a guest on numerous radio programs across the country and the subject of countless articles. The story of her personal journey appears in books such as Touched By the Savior by Mike Yorkey, True Stories of Answered Prayer by Mike Nappa, Faces of Faith by John Hanna, and I Saw Him In Your Eyes by Ace Collins.

The murder of Krista Carmichael’s fourteen-year-old sister by an online predator has shaken her faith and made her question God’s justice and protection. Desperate to find the killer, she creates an online persona to bait the predator. But when the stalker turns his sights on her, will Krista be able to control the outcome?

Ryan Adkins started the social network GrapeVyne in his college dorm and has grown it into a billion-dollar corporation. But he never expected it to become a stalking ground for online Predators. One of them lives in his town and has killed two girls and attacked a third. When Ryan meets Krista, the murders become more than a news story to him, and everything is on the line.

Joining forces, he and Krista set out to stop the killer. But when hunters pursue a hunter, the tables can easily turn. Only God can protect them now.

If you would like to read the first chapter of Predator, go HERE.

Got so busy I almost forgot I needed to post a review for Predator. I’m glad I remembered because this is a must read book, especially for parents with children who use internet social networking sites or for those who frequent those sites themselves. Although Predator is a novel, it is evident that Blackstock did her research before writing it. Grapevyne may be a fictional company but the similarities to and dangers of Facebook and other social networking sites are evident. It is a timely tale with enough cautions woven into the plot to make me rethink my own Facebook habits and cringe at some of the info I see revealed about some of my friends.

That being said, Predator is also a great story filled with plenty of action, mystery, drama, suspense, and romance to satisfy most readers.  As always, Blackstock has done a superb job with Predator, her latest release. It is just another fine example of why I have always enjoyed her books.