Back on Murder by J. Mark Betrand

This week, the
Christian Fiction Blog Alliance
is introducing
Back On Murder 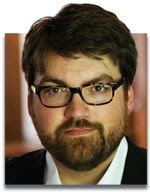 J. Mark Bertrand has an MFA in Creative Writing from the University of Houston. After one hurricane too many, he left Houston and relocated with his wife Laurie to the plains of South Dakota.

Mark has been arrested for a crime he didn’t commit, was the foreman of a hung jury in Houston, and after relocating served on the jury that acquitted Vinnie Jones of assault. In 1972, he won an honorable mention in a child modeling contest, but pursued writing instead. Besides his personal website, visit his Crime Genre website at http://www.crimegenre.com/.

The next book in this series, Pattern Of Wounds will come out in the summer of 2011. 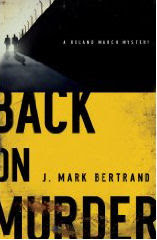 Det. Roland March is a homicide cop on his way out.
A missing girl. A corrupt investigation. They thought they could get away with it, but they forgot one thing:

Roland March is BACK ON MURDER…

Houston homicide detective Roland March was once one of the best. Now he’s disillusioned, cynical, and on his way out. His superiors farm him out on a variety of punishment details. But when he’s the only one at a crime scene to find evidence of a missing female victim, he’s given one last chance to prove himself. Before he can crack the case, he’s transferred to a new one that has grabbed the spotlight–the disappearance of a famous Houston evangelist’s teen daughter.
All he has to do? Find the missing teenage daughter of a Houston evangelist that every cop in town is already looking for. But March has an inside track, a multiple murder nobody else thinks is connected. With the help of a youth pastor with a guilty conscience who navigates the world of church and faith, March is determined to find the missing girls while proving he’s still one of Houston’s best detectives.

Battling a new partner, an old nemesis, and the demons of his past, getting to the truth could cost March everything. Even his life.

If you would like to read the first chapter of Back On Murder, go HERE.

Back On Murder tells the story of a discouraged, disinterested,  has-been detective who finds himself at the scene of a murder that sparks his interest and a determination to prove that he still has what it takes to be a top homicide cop. Unfortunately, his unwelcome ideas about the case do not sit well with the other detectives who have lost faith in his abilities and he finds himself shuttled off to work on an unrelated case (or is it?).

Back On Murder explores the private life of  Roland March, his dedication and near obsession with his job, his uncomfortable marriage,  and the memories that haunt both him and his wife. The reader is taken on a twisted journey through apparently unrelated clues that cannot possibly come together enough to solve the case. As the narrative reaches its conclusion, not only do the facts begin to mesh but Roland finds some peace and redemption in his own life.

Both the characters and events ring true in Back On Murder. It is a story where good guys are flawed and make mistakes and where sometimes a bad guy can change his life. It is a gritty story that reveals some unpleasant facts of life and may not be suitable for younger readers. But for those who enjoy this genre, Back On Murder is a must read. I highly recommend it.