The Gathering Storm by Bodie and Brock Thoene

This week, the
Christian Fiction Blog Alliance
is introducing
The Gathering Storm 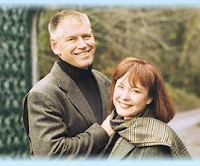 Bodie and Brock Thoene (pronounced Tay-nee) have written over 50 works of historical fiction. Over twenty million of these best-selling novels are in print. Eight ECPA Gold Medallion Awards affirms what millions of readers have already discovered—the Thoenes are not only master stylists but experts at capturing readers’ minds and hearts.

Bodie began her writing career as a teen journalist for her local newspaper. Eventually her byline appeared in prestigious periodicals such as U.S. News and World Report, The American West, and The Saturday Evening Post. She also worked for John Wayne’s Batjac Productions (she’s best known as author of The Fall Guy) and ABC Circle Films as a writer and researcher. John Wayne described her as “a writer with talent that captures the people and the times!” She has degrees in journalism and communications.

Brock has often been described by Bodie as “an essential half of this writing team.” With degrees in both history and education, Brock has, in his role as researcher and story-line consultant, added the vital dimension of historical accuracy. Due to such careful research, The Zion Covenant and The Zion Chronicles series are recognized by the American Library Association, as well as Zionist libraries around the world, as classic historical novels and are used to teach history in college classrooms.

Bodie and Brock have four grown children—Rachel, Jake, Luke, and Ellie—and seven grandchildren. Their sons, Jake and Luke, are carrying on the Thoene family talent as the next generation of writers, and Luke produces the Thoene audiobooks.

Bodie and Brock divide their time between London and Nevada.

As Nazi forces tighten the noose, Loralei Kepler, daughter of a German resistance leader, must flee her beloved Germany. But is any place safe from Adolf Hitler’s evil grasp? Loralei’s harrowing flight leads her into the arms of needy child refugees, who have sacrificed everything in exchange for their lives, and toward a mysterious figure, who closely guards an age-old secret.

Explore the romance, the passion, and the danger of the most anticipated series of the last twenty years.

Born from the highly acclaimed and best-loved novels of three generations of readers — The Zion Covenant series and The Zion Chronicles series — Zion Diaries ventures into the lives of the inspiring and intriguing characters who loved intensely, stood up for what was right, and fought boldly during Hitler’s rise to power and the dark days of World War II.

If you would like to read the first chapter of The Gathering Storm, go HERE

I have enjoyed books by the Thoenes since the very first Zion series. I can remember waiting impatiently for the next book in the series to be released so I could see what would happen next. Although I was naturally aware of the actual historical events, I had become quite involved in the lives of the characters – that is how realistically they had been portrayed. I also loaned those series to so many friends that many of them became fairly tattered. So of course I was excited to be offered a new ‘Zion’ book, The Gathering Storm to review.

The Gathering Storm started off a little slowly for me. I actually put it down for a couple of days because I just wasn’t in the right mood for another ‘war’ novel. I’ve had quite a few of those lately on my review list. I did come back to it and once I actually started reading it, I found it to be just as captivating as the earlier series(s). The characters were just as real, the historical elements obviously well researched, and the plot kept to a steady pace. The Gathering Storm did take a somewhat different track than the earlier ‘Zion’ books in that a mystical element pertaining to a Jewish legend was incorporated into the plot. Another different approach was that the book both began and ended with the author’s (Bodie) visit to the home of the heroine of the story.