One Extraordinary Day by Harold Myra

It is time to play a Wild Card! Every now and then, a book that I have chosen to read is going to pop up as a FIRST Wild Card Tour. Get dealt into the game! (Just click the button!) Wild Card Tours feature an author and his/her book’s FIRST chapter!

Harold Myra served as the CEO of Christianity Today International for 32 years. Under his leadership, the organization grew from one magazine to a communications company with a dozen magazines, co-published books and a major internet ministry.

Author of five novels, numerous children’s and non-fiction books and hundreds of magazine articles, Myra has taught writing and publishing at the Graduate School of Wheaton College in Illinois. He holds honorary doctorates from several colleges, including Biola University in California and Gordon College in Massachusetts. Harold and his wife Jeanette are the parents of six children and five grandchildren. They reside in Wheaton, Illinois. 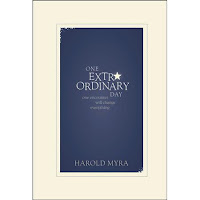 The alarm barely penetrated David’s sleep. He fumbled with the unfamiliar hotel clock, found the button, and pressed.

Ten minutes later, another alarm blared at him from across the room. Although he had set it himself, he threw back the covers and stamped toward the sound, slammed it quiet, then burrowed back into his pillow.

An hour later, morning sunlight through the sliding glass door played on his face. He opened one eye. Outside, aspen and birch leaves filtered the light. A swallow flitted by. He sat bolt upright and looked at the clock beside him.

Already 6:30! He only had one day here, and now he had wasted the best hour.

David had wanted to rise before dawn, to inhale these surroundings as the trees and lake became visible. He loved rising at dawn to see the sunrise and feel some control over his day, though he hadn’t done so in years. Now the sun was already bright in a blue sky.

He felt little control over his life these days. The communications company where he worked had downsized, firing half his colleagues. Maybe he’d be next.

To make matters worse, he felt betrayed by his boss, Frank, who had persuaded him to give up a very good job to take his current position. Now David realized Frank had known all along that his company was in trouble, that David’s strengths would enable him to function with fewer people. It was particularly galling that Frank had lured him not with money but with a mission he knew David believed in—providing hope to mentally ill children. David cared deeply for children and had been willing to swallow a reduced salary. He had accepted the deal but now would have to do the work of at least two people and as a result had come to detest Frank.

Twisting his body toward the window and putting his feet on the floor, he reached over to pick up a photo of his wife, Marcia. It was his favorite—she was looking out from under a beach umbrella with an impish grin. At least Marcia wouldn’t let him go.

David stood, ran his fingers through his reddish brown hair, pulled his jeans on, and buttoned them over his flat belly, the result of careful eating and no-nonsense workouts. He had always brought passion to whatever he did and drove himself to be self-disciplined and to make a difference in the world. He inserted the coffee bag into the cabin’s little Black & Decker coffeemaker and filled the carafe only halfway. Lately he wanted his coffee stronger and stronger. He felt like he had been an ice skater pumping full-bore through life and gaining speed but had suddenly hit a line of dirt and crashed.

Marcia had arranged this cabin for him. “Get away—at least for one day,” she had said. “Go up north this Sunday. Take all day in the woods. Decompress!”

Thank goodness for Marcia. He hated making her feel bad; he wanted to match her enthusiasm for life as he always had. But Frank’s treachery and David’s own career slump made his drive and dreams of significance seem a farce.

The two mugs of black coffee were just enough to wash down the big sweet roll he had bought the night before. Now he was wired, but he sat quietly, staring at the woods and lake. His parents had often brought him here as a child to explore this lake and the trails through the woods. Now he longed for that uncomplicated joy, for the solitude and wonder of sighting a hawk floating above or being startled by the warning snort of a deer. Once he had come upon a doe in a meadow with two speckled fawns, one nursing at her side. He had scarcely breathed as he watched until the fawn pulled away and all three walked slowly into the woods.

Finally David slid open the glass door and walked down to the lake. At water’s edge he watched five seagulls skimming the surface, rising, plunging, soaring in their spontaneous choreography. Two mallards dipped toward the lake and gracefully hit the water.

In that instant, magnificent music erupted into David’s world, resonating throughout his body, music of unknown instruments lifting and inspiring. At the same moment he saw the blue sky shattered by a kaleidoscope of colors and vivid images pulsing from horizon to horizon. On the lake, shimmering, cascading light illumined the waves, reflecting purples, magentas, and greens.

A sliver of something like joy rippled through him and then evaporated. Fragrances filled his nostrils, odors he found so delightful he involuntarily breathed deeply to capture more.

All this happened in a moment and was gone. The extraordinary phenomenon that was forever imprinted on his memory was over in a moment, leaving every sense of his mind and body jolted, tantalized, drawn into the strange, celebratory dynamics, as if his entire being was made for them.

A few years before, David had happened to look out his window during a storm just as a bolt of lightning had struck a nearby tree. It had sheared off half the trunk, and David had been stunned at both the blinding light and the force—like a giant sledgehammer of light that had slammed into his yard.

Now, standing at lake’s edge, he felt the same extreme of force, but far more than a sledgehammer of white light. It had captured the sky with colors and shapes and had reverberated like cannon fire. Yet like the lightning hitting the tree, the mysterious phenomenon was over in seconds. What had it been? Could it actually have lasted just moments, all that grandeur, all that force and image and fragrance already vanished?

He looked around. All was as it had been. No broken trees. No breaks in the lake’s perimeter. Just clear sunlight shimmering on the waves. He scanned the sky. Only a few white clouds in the expanse of blue. He sniffed the air. Nothing but the scent of pine. He looked behind him to the hotel. No one in sight.

He stood on the sand by the lapping water for long moments, letting all the elements of those extraordinary seconds flow through his consciousness.

As he slowly sat down on a bench, the shapes and sounds and emotions still resonated in his trembling body. He could make no sense of what he had just experienced. He felt like a man on a raft in rapids, plunging and spinning through waves, spray, rocks, and logs, not knowing what might befall him next. At the same time, nibbling at the deep pools of his angst was a wondrous elixir of the scents and sounds and images . . . and a tantalizing element of peace.

The mallards flew off. The gulls had settled across the lake, five white, bobbing specks on the waves. Yet the serenity around him did nothing to soothe his inner turmoil. What was happening to him? He looked down at the white pebbles of the manicured walk beside his feet. Everything was perfect, lovely, “decompressing”—yet within him, a maelstrom of weariness, confusion, and desires.

David trudged the pebbled walk to the resort office, his eyes probing every bush, brick, and branch. He picked up a fat pinecone and felt its perfect ridges in his hand. Everything was the same as when he’d awakened this morning, yet in some strange way, his world had changed.

In the office he asked the woman at the counter, “Did you hear that loud sound out at the lake? About half hour ago?”

Cocking her head and scrunching her angular features, the woman looked up from counting restaurant receipts. “Nope.” She looked back down, her fingers still working the receipts.

“It was a strange sound,” he said, “and a huge flash of colorful light. Someone must have heard or seen it.”

He watched her moving fingers and squeezed the pinecone till he felt a little stab of pain. “I was hoping someone besides me had heard it.”

“Sonic boom!” The hearty voice from behind startled him, and he whirled around to face two older men lounging in captain’s chairs. They wore flannel shirts under battered fishing hats. “Happens up here, young fella,” one of them declared.

The man was sitting back in his chair, eyes on David as if to appraise this city boy. His authoritative tone rankled David.

Despite himself, David put a sarcastic edge on his response. “Not a sonic boom! I’ve heard sonic booms. And there were brilliant, strange lights.”

The man edged up in his chair as if savoring this new development. “Strange, eh?” He turned to his companion. “Hear anything or see anything strange, Ed?”

Ed, heavyset and sunk in his chair, smiled, shook his head, and said, “Naw, Pete. Not today.”

Both men looked at David with amusement. David squeezed the pinecone in his hand so hard he could feel it etching little ridges in his palm. Turning his head toward the woman, David saw she had set aside the receipts, her full attention on the little drama, mouth crinkling toward a smile.

Disdain. The old man’s face was eloquent in showing his contempt, with just a trace of triumphant grin. His expression reminded David of an action movie scene he remembered: the hero, with that same look of disdain, had silenced a bragging Nazi youth, staring him into humiliation.

This old guy with the same look was no movie hero. He was pudgy and looked a little like David’s boss. In fact, the man reminded David far too much of Frank, and he felt rage growing in his chest. He thought of all sorts of cutting responses, yet he sensed more verbal jousting would most likely result in his being humiliated even more.

David looked over at the woman at the desk. Her smile masked a hint of gloating satisfaction. She slightly raised her eyebrows as his eyes met hers and then, maddeningly, she winked at him.

Instead of responding, he turned abruptly and stepped outside. Halfway back to his cabin, he flung the pinecone in a high arc toward the lake.

Short but sweet mini-book that can be read in one sitting. Too short to build characters adequately so it was difficult to become involved in the story. An encounter with a stranger from another world leaves the reader with some food for thought and the realization that most believers take for granted the enormous, wonderful gift we have been given in our salvation.