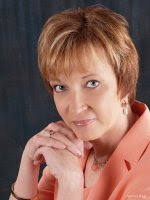 It was during the long Canadian winters at home with her children that Lynn made progress on her dream to write, carving out a few hours of writing time each day while her children napped. Lynn credits her early experience of learning to write amid the chaos of family life for her ability to be a productive writer while making sure her family remains her top priority.

Along with reading, two of Lynn’s lifelong passions are history and archaeology. While researching her Biblical fiction series, Chronicles of the Kings, these two interests led her to pursue graduate studies in Biblical Backgrounds and Archaeology through Southwestern Theological Seminary. She and her son traveled to Israel during the summer of 1989 to take part in an archaeological dig at the ancient city of Timnah. This experience contributed to the inspiration for her novel Wings of Refuge.

Lynn resigned from teaching to write full-time in 1992. Since then she has published twelve novels. Five of her historical novels, Hidden Places, Candle in the Darkness, Fire by Night, A Proper Pursuit, and Until We Reach Home have won Christy Awards in 2002, 2003, 2004, 2008, and 2009 for excellence in Christian Fiction. Fire by Night was also one of only five inspirational fiction books chosen by Library Journal for their top picks of 2003, and All She Ever Wanted was chosen as one of the five inspirational top picks of 2005. Lynn’s novel Hidden Places has been made into a movie for the Hallmark Channel, starring actress Shirley Jones. Ms Jones received a 2006 Emmy Award nomination for her portrayal of Aunt Batty in the film.

In an unassuming apartment building in Brooklyn, New York, three lives intersect as the reality of war invades each aspect of their lives. Young Esther is heartbroken when her father decides to enlist in the army shortly after the death of her mother.

Penny Goodrich has been in love with Eddie Shaffer for as long as she can remember; now that Eddie’s wife is dead, Penny feels she has been given a second chance and offers to care for his children in the hope that he will finally notice her and marry her after the war.

And elderly Mr. Mendel, the landlord, waits for the war to end to hear what has happened to his son trapped in war-torn Hungary. But during the long, endless wait for victory overseas, life on the home front will go from bad to worse.

Yet these characters will find themselves growing and changing in ways they never expected–and ultimately discovering truths about God’s love…even when He is silent.

If you would like to read the first chapter of While We’re Far Apart, go HERE.

Learn more about Lynn and her books on her Website.

While We’re Far Apart is historical fiction at its best. Set in Brooklyn, New York during World War II, the book tells the story of four lonely people whose lives intersect at their apartment building. As they spend time together, positive changes occur for each of them. While We’re Far Apart is filled with rich historical details and character development that brings a lifelike quality to the story. Descriptions of Jewish tradition and history add even more depth and understanding of the era. Although not a historical romance,  there is a little romance to be found. While We’re Far Apart is filled with surprises and has a totally unexpected ending. As always, I recommend anything written by Lynn Austin.