Blood of the Prodigal by P. L. Gaus

This week, the
Christian Fiction Blog Alliance
is introducing
Blood of the Prodigal
Plume; Reprint edition (September 28, 2010)
by
P.L. Gaus 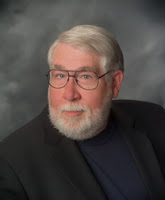 Paul took an interest in writing fiction in 1993, and with the advice and encouragement of author Tony Hillerman, he began writing mystery novels set among the Amish in Holmes County, Ohio. The first of Gaus’s mysteries, Blood of the Prodigal, An Ohio Amish Mystery, was published by Ohio University Press in June of 1999, and a total of six novels have appeared in this series: Broken English, 2000, Clouds Without Rain, 2001, Cast a Blue Shadow, 2003, A Prayer for the Night, 2006, and Separate from the World, 2008. A seventh novel in the series is in preparation.

All of Paul’s stories have now been republished by Plume (a division of Penguin Group USA) as The Amish-Country Mysteries, and these editions have been embraced by Christian retailers such as CBD.com, Family Christian Stores, and LifeWay. Future mysteries in the series will still first be published in hard cover editions, as The Amish-Country Mysteries by Ohio University Press, with Plume bringing out the soft cover editions some time later.

Paul and his wife Madonna still travel frequently in Holmes County. He lectures widely about Amish culture at libraries, bookstores, literary societies, and the like, and his books have been featured at Book Expo America and similar professional shows around the country. Paul’s novels have been reviewed in prominent journals and newspapers, for instance, Kirkus Reviews, ForeWord Magazine, Publishers Weekly, Library Journal, Booklist, Ohioana Quarterly, and the New York Times Book Review.

For Jonah Miller, shunned by his Old Order sect and cast into the wider world, the summer begins with his decision to kidnap his ten-year-old son from the home of the bishop who had exiled Miller a decade earlier. In his desperation to retrieve the boy, the bishop appeals for help to the only “English” men the sect would ever approve.

Professor Michael Branden and Pastor Caleb Troyer had been looking forward to the kind of sleepy rural summer they had enjoyed as boyhood friends growing up in the small college town of Millersburg. Instead, they plunge into the normally closed Amish culture to find the boy. When the kidnapping leads to murder, they can no longer keep the case from the law. Working sometimes at cross purposes with his friend Sheriff Bruce Robertson, Professor Branden digs through the past to uncover truths that many would prefer to leave undisturbed. Little does he suspect that even the anguished bishop, torn by an insoluble moral dilemma, tragically does not tell everything he knows about the case. Suddenly the vast tangle of Amish and Mennonite settlements that sprawl among several thousand small farms and homesteads seems less bucolic than unknowable and impenetrable.

As they inquire delicately among the peaceful ones, Branden and Troyer learn that the troubles of Jonah Miller began far earlier than the kidnapping, with his Rumschpringe – the customary wild year before taking Amish vows. But his grand Rumschpringe had exploded into a decade of drugs, whiskey, and women, in the company of people no Amish person should meet.

In the tradition of Tony Hillerman, P. L. Gaus depicts a culture that successfully stands outside the mainstream yet interacts with it in complex and fascinating ways, a culture that is every bit as susceptible to the undertow of the human spirit as any we might know.

If you would like to read the first chapter of Blood of the Prodigal, go HERE.
Learn more about P.L. and his books on his Website.

Blood of the Prodigal is quite different than the usual Amish novel in that it has no romance and it is a mystery. Rather than a day-to-day inside look at Amish life, any details of the lifestyle are given as background information connected to the mystery itself. Overall the book was interesting and held my interest well. The ending was rather a surprise because there were no real clues leading to that conclusion until nearly the end. This is definitely one mystery the reader will not solve early in the book.

The book description above is so complete that I see no reason to repeat it. Blood of the Prodigal is not what most would classify as Christian fiction since it does not have a strong message of faith. Nevertheless it has no excess violence, offensive language or other questionable content.