Out Of Control by Mary Connealy

This week, the
Christian Fiction Blog Alliance
is introducing
Out Of Control
Bethany House; Original edition (August 1, 2011)
by
Mary Connealy
ABOUT THE AUTHOR: 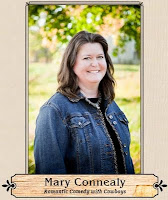 Mary Connealy writes romantic comedy with cowboys. She is a Christy Award Finalist, a Carol Award Finalist and an IRCC Award finalist.

Julia Gilliland has always been interested in the natural world around her. She particularly enjoys her outings to the cavern near her father’s homestead, where she explores for fossils and formations, and plans to write a book about her discoveries. The cave seems plenty safe–until the day a mysterious intruder steals the rope she uses to find her way out.

Rafe Kincaid has spent years keeping his family’s cattle ranch going, all without help from his two younger brothers, who fled the ranch–and Rafe’s controlling ways–as soon as they were able. He’s haunted by one terrible day at the cave on a far-flung corner of the Kincaid property, a day that changed his life forever. Ready to put the past behind him, he plans to visit the cave one final time. He sure doesn’t expect to find a young woman trapped in one of the tunnels–or to be forced to kiss her!

Rafe is more intrigued by Julia than any woman he’s ever known, but how can he overlook her fascination with the cave he despises? And when his developing relationship with Julia threatens his chance at reconciliation with his brothers, will he be forced to choose between the family bonds that could restore his trust and the love that could heal his heart?

If you would like to read the first chapter of Out Of Control, go HERE.

The title Out Of Control is an apt one in more ways than one. Like a team of wild horses, the plot takes off from the very beginning and its breakneck speed has you holding on to your hat until the very end. Out of control also describes what happens to Rafe Kincaid’s very carefully planned life when he stumbles upon Julia Gilliland  trapped in a cave on his property. Sparks fly from their first encounter and the heat between them builds until the conclusion.

Out Of Control is all that I expected from Mary Connealy’s newest novel. The imaginative and well paced plot is laced with plenty of action, adventure, humor, and romance. The primary characters are well developed, likeable and just plain fun. Interaction between them was often witty and entertaining. The women are smart and spunky and the men are true heroes who seem to have been raised right by their mama. Even if the guys come across as a bit dense at times, their hearts are in the right place. They did manage to overcome some deeply seated fears in order to help protect the women.

I loved the story’s setting and how everything revolved around the caverns. The historical background added to its interest. It also helped that we were given a good peek into what I suspect could be the next Kincaid romance. A strong message of faith is a natural part of the story without being obtrusive. Can’t wait for the next installment.