This week, the
Christian Fiction Blog Alliance
is introducing
Cooking The Books
Abingdon Press (April 2012)
by
Bonnie S. Calhoun
ABOUT THE AUTHOR: 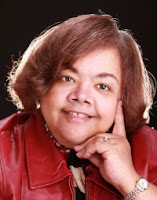 In her spare time she is an avid social media junkie, and teaches Facebook, Twitter, Blogging and HTML as recreational occupations. She also has a novel coming out in the Abingdon Quilts of Love series. Her novel Pieces of the Heart will publish August of 2013.

Bonnie and her husband Bob live in a log cabin on 15 acres in upstate area of Binghamton, New York with a dog and cat who consider the humans as wait-staff.

After her mother dies from a heart attack, Sloane Templeton goes from Cyber Crimes Unit to bookstore owner before she can blink. She also “inherits” a half-batty store manager; a strange bunch of little old people from the neighborhood who meet at the store once a week, but never read books, called the Granny Oakleys Book Club; and Aunt Verline, who fancies herself an Iron Chef when in reality you need a cast iron stomach to partake of her culinary disasters. And with a group like this you should never ask, “What else can go wrong?”

A lot! Sloane begins to receive cyber threats. While Sloane uses her computer forensic skills to uncover the source of the threats, it is discovered someone is out to kill her. Can her life get more crazy?

If you would like to read the first chapter of Cooking The Books, go HERE.

If you’d like to read interviews with Bonnie, try these:

Move over Stephanie Plum – there’s a new kid on the block by the name of Sloane Templeton. If anything, Sloane is surrounded by an even crazier group of friends and enemies and is armed with a wacky sense of humor. Sloane is a strong and spunky character but is also somewhat lacking in self-confidence. She has absolutely NO discernment when it comes to men  and she has been involved with some doozies, some of whom haven’t figured out she wants them out of her life. Like all of us, Sloane has her flaws and has made some really bad decisions along the way. But she has her faith, even if at times even that seems to desert her.

There is a lot going on in Cooking The Books. Sloane has inherited her mother’s bookstore and is doing the best she can to run it although she would prefer her old job in computer forensics. Between new boyfriends, old boyfriends, a hotly disputed valuable manuscript, pressure to sell the bookstore, death threats, and a frustrating aunt ( just to mention a few things), Sloane has her hands full. Cooking The Books is a story filled with suspenseful twists and turns tempered by a rollicking sense of humor. Although I had pretty much figured out who was out to get Sloane, things changed directions so often that I was never entirely certain until the reveal. And it was so much fun getting there.

I loved this book and the way Sloane grew in maturity and confidence as the story progressed. Bonnie, I hope you have another Sloane Templeton story on the back burner because I’d love to see more of her.