The Gift by Bryan Litfin

Bryan earned a bachelor’s degree in print journalism from the University of Tennessee as well as a master’s degree in historical theology at Dallas Theological Seminary. From there he went to the University of Virginia, taking a PhD in the field of ancient church history. He is currently professor of theology at Moody Bible Institute in downtown Chicago, where he has been since 2002. He teaches courses in theology, church history, and Western civilization from the ancient and medieval periods. He is the author of Getting to Know the Church Fathers: An Evangelical Introduction (Brazos, 2007), as well as several scholarly articles and essays. Bryan has always enjoyed epic adventure stories as well as historical fiction, but most of his reading these days is taken up by academia.

Today Bryan lives in downtown Wheaton in a Victorian house built in 1887. He and his wife Carolyn are parents to two children. For recreation Bryan enjoys basketball, traveling, and hiking anywhere there are mountains. The Litfins attend College Church in Wheaton, where Bryan has served on the Board of Missions and as a deacon. He also helped start Clapham School, a Christian primary school in Wheaton using the classical model of education. 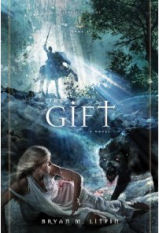 The Chiveis Trilogy takes readers hundreds of years into the future. War and disease have destroyed civilization as we know it. Much technology has been discarded and history is largely forgotten. Slowly, the few survivors have begun to build new communities, and kingdoms now prosper in a kind of feudal order. But the Word of God has been lost for centuries.

After the finding of an Old Testament in book one of the trilogy, The Gift picks up the story of Teo and Ana. Exiled from their homeland and trying to survive in unknown and dangerous lands, they search for any record of the missing Testament.

Their journeys lead them into the region we know as Italy. An elite society welcomes Ana, who finds she must choose between her new life and her dream of returning to Chiveis. Will Teo and Ana’s relationship withstand the circumstances and new enemies pulling them apart? And can Teo keep ahead of a powerful and mysterious force opposing his search for the New Testament?

If you’d like to read the first chapter of The Gift, go HERE.

When I first opened The Gift, I was afraid I would have a difficult time getting through it. You see, it doesn’t fall under any of my preferred genres of books. Happily, once I got into the story, I found that it pulled me right along as it gained momentum. Filled with interesting characters, plenty of action, suspense, and a plot that rarely slows down, The Gift also contains a great deal of spiritual insight and depth.

The Gift is the second novel in the Chiveis Trilogy but contains enough background information to keep the new reader from feeling lost. In this post-apocalyptic tale, Teo and Ana are on a quest to find the missing second part of the holy book they found in The Sword. Along the way they encounter those who are either opposed to their mission or those who have the same objective. In particular, the Exterminati (don’t you just love that title?) are determined to eliminate them and all other Christiani.

For those who are easily offended, I must add a word of warning. Although not explicit, there are several scenes that deal with decidedly “adult” topics and other scenes that are quite violent. I personally felt that these scenes were necessary to clarify the decadence of the societies. I would advise that parents read this book before giving it to their mature children.